In just over a year, a small garden with a few vegetable plants has become a large-scale agricultural operation – and as a result, the Missionary Oblates’ ministry in Zambia is growing as welThe garden, located at the Oblates’ House of Studies in the town of Makeni, includes more than 21,000 tomato plants and 10,000 heads of cabbage, along with smaller amounts of green peppers, potatoes, eggplants and onions. There is even a rapidly growing poultry operation.

Brother George Mandona, O.M.I. oversees the farming operation with the help of four employees. Brother George said the garden is a way for the Oblates to become more self-sufficient. 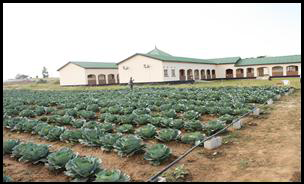 We are making about $100 a day selling vegetables and about $50 a day selling eggs,” said Bro. George. “With this money we are able to fund some small projects in our missions.”

In October 2011, when Bro. George was asked to work full-time on the garden project, there were about 1,000 tomato plants and 600 cabbage plants. It provided the seminarians and staff at the House of Studies with their vegetables, but had almost no impact on local residents.

Today, produce from the garden is sold at wholesale prices in the city’s biggest market and in two other densely populated parts of town. Efforts are underway to sell their vegetables 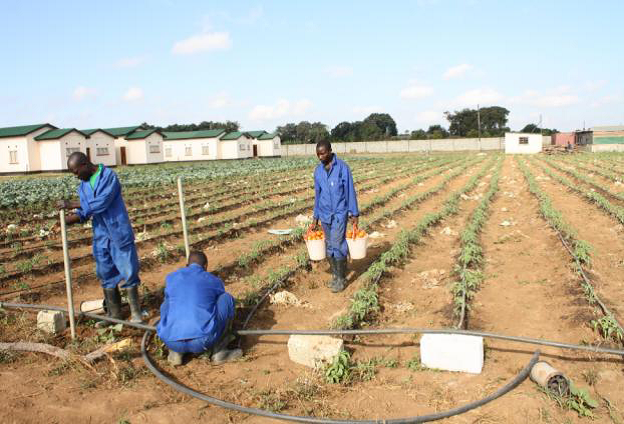 to one of the leading chain of supermarkets.

Brother George is also raising chickens and pigs. The chickens provide about ten trays of eggs every day. He also plans to build a few fish ponds in the near future.

“Fish is very expensive here. We probably spend about $100 a week on fish for our seminarians,” said Bro. George. “When the fish ponds are up and running maybe we can cut that bill down to about $20 a week.”

Brother George said he and his team of workers are trying to make the farm as self-sustainable as possible. Vegetables from the garden are used to feed the animals. Manure from the animals is used as fertilizer for the plants. Water flowing from the fish ponds will be used to irrigate the garden.

“We shouldn’t waste any of the natural resources that we have,” said Bro. George. “Even if they are very small.”

The garden at Markeni is already being used as a model for other garden projects at Oblate missions in Zambia. In Livingston, a similar large-scale agricultural operation is being developed. In smaller missions, community gardens are being expanded to provide food for the Oblates and their neighbors.

“As a missionary I can’t be only interested in theology,” said Bro. George. “I have to do something that is practical, and this garden is a way to take theory and put it in to practice for the good of the people we serve.”