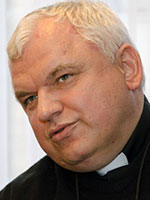 “We are cut off from the rest of the country,” the Auxiliary Bishop of Odessa-Simferopol, Missionary Oblate Msgr. Jacek PYL, writes to Aid for the Suffering Church, concerning the actual situation in Crimea.

He continues: “We communicate only by telephone and e-mail. Even the aid packets are blocked at the border.” In spite of the very few resources available, the Catholic Church, which has only about two thousand faithful, is taking care of so many families in difficulty. After the referendum that sanctioned the annexation of Crimea to Russia, the Ukrainian banks closed to make way for those of the Federation; Russian money has just begun to circulate and during the transition, the people could not touch their bank accounts nor receive wages and pensions. “We are trying to respond to the emergency, handing out food and medicines, with special attention to large families. We also help the Greek-Catholic families who are participating in our liturgical celebrations because all of their priests have left Crimea.”

The members of the Roman Catholic clergy have remained on the disputed peninsula, but it is not yet clear if they will be able to stay. It seems that the government in Moscow will require a visa of Ukrainians not born in Crimea; many of the religious who work in the Diocese of Odessa-Simferopol are of Polish nationality with a long-term residency permit issued by the Ukrainian government. The separation has also canceled years of negotiations with Kiev for the restitution of Church properties taken during the soviet era. “The church in Sebastopol, turned into a theater under communism, was on the verge of being returned to the Church, but past efforts are no longer valid.” Also construction and restoration permits already obtained are now useless, but Bishop Pyl does not let himself be discouraged: “We have restarted many times from zero and we are ready to do it again. The important thing is that no one put obstacles in our path.”

Some weeks ago, in a letter addressed to the people, the bishop invited the people of Crimea “to not permit that the brotherhood among the people of the peninsula be broken.” An identical appeal was later made by Metropolitan Lazarus of Simferopol and Crimea of the Russian Orthodox Church. “Christians of every denomination have prayed in spiritual union so that there be no fratricide. The fact that there was no blood shed during the passage of Crimea to Russia is a sign of the strength of our prayer.”

Many Orthodox priests, tied to the Kiev patriarchate, have left Crimea for fear that Moscow intends to absorb their Church or even forbid its presence on the peninsula. Deprived of their own clergy, the Christians of the Ukrainian Church have preferred to turn to the Catholic Church rather than the Russian Church. “Their faithful have expressed the desire to pray with us and I immediately agreed. We are all children of the One God.” 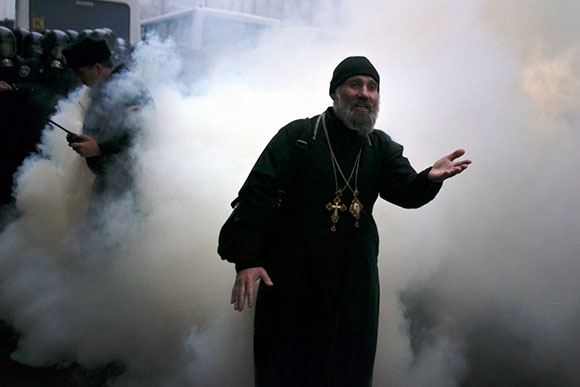 Relationships with the Islamic community are stable for the moment, although the media speak of the arrival in Crimea of militant groups coming from Chechnya and the republics of the former Yugoslavia. “The situation is still calm but the news that we get from the media is alarming.”

Considering the uncertain future of the region, Bishop Pyl repeats the great need for prayer. He says that in Crimea, they survive only thanks to the Christian virtues: faith, hope and charity. “Faith allows us to look at what has happened through the prism of God’s providence; with hope, we look to the future, because we know that God is near us in this difficult moment; and charity, toward God and our neighbors, helps us to avoid fostering hatred in our hearts. (9 April 2014, www.acs-italia.org)