On the occasion of his 60th anniversary of priesthood, Fr. Bertram Silver speaks about the origin of his missionary vocation. 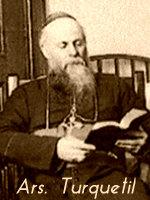 After having spent over forty years with the Eskimos the Bishop Arsène Turquetil chose to retire at our scholasticate in Washington. He lived with our Oblate community for about ten years. During this time he would daily meet with us scholastics, sharing his experiences of living for and with the Eskimos. Annually, on the eve of the feast of “The Little Flower,” St. Therese of the Child Jesus, he would share with us how, before her canonization, she was helpful in bringing the first converts to him. It was the year 1916 – Father Turquetil’s fourth fruitless year with the Eskimos. Two Oblates had been murdered the year before. His bishop granted one last year before closing the mission. Then two unsigned envelopes arrived from Normandy, France. One of the letters contained dust from under her casket. Father Turquetil and Brother Girard prayed and the next day sprinkled some of the dust over the unsuspecting Eskimo visitors. The next Sunday, these visitors asked for instruction – 17 Eskimos were baptized – the mission was saved. With tears in his eyes, he would end his talk with us. The year after my ordination, the Bishop went to our Lord and he is buried at our Oblate Cemetery in Tewksbury!

Why mention Bishop Turquetil in this article? Because he is my model as a “missionary”. During my several years in Washington, I met many Oblate missionaries who had been working in foreign countries. I was one of the group that took care of the Missionary Files. About three years before ordination, I had made up my mind to ask for “the foreign missions”, mostly because of the example of Bishop Turquetil. I gave a lot of thought to the missions our province was connected with: Brazil, Philippines, and Japan.

When I was in theology, Bishop Taguchi, he Bishop of Osaka and the Prefect of Shikoku, came to the scholasticate and gave us a talk about Japan – specifically about Shikoku. The Oblates had gone to Japan in 1948 and he was thankful to the Superior General for accepting the invitation to send missionaries to his diocese. Again, I think it was the Holy Spirit guiding me to be “sent” to Japan. I received permission, with three other scholastics, to take courses in Japanese at Georgetown University. I was most grateful. But receiving my obedience to Japan in 1954 was one of the happiest days of my life. Thanks to Bishop Taguchi and Bishop Turquetil.

Just about sixty years have gone by. I am grateful to the Oblates for letting me spend most of these years in the Prefecture of Tokushima. I made efforts to become adapted to Japan and the Japanese. My love for the sound of the Japanese drum has opened doors for evangelization. I became involved in “Utai” — Japanese cultural opera singing. Learning to play the Japanese flute or “shakuhachi” also introduced me to the silent sounds of the Japanese culture. Just “being available” seemed to be my missionary outlook. To bring Christ to those who do not know Him.

My thanks to the Oblate community in Japan for “putting up” with me for these sixty years. I plan on enjoying the “Golden Years” – with the help of our Lord and the love of our Blessed Mother. (The Far East Star, April 2014)