Earth Day 2014: It’s really getting to be an important world-wide event and I agree that it should be. But I can’t help thinking back to the first Earth Day, in April of 1970 – I was there and I remember it well but must admit I had no idea it would turn out as it has.

I was a student at Southern Illinois University at Edwardsville, a relatively small campus of about 12,000 students. As I recall there were 6 buildings then with a quadrangle in the middle. I would guess more than half the students at that time (myself included) were commuters, the first on-campus housing had just opened and couldn’t hold anywhere near the population.

I had spent nearly a year at Southern Illinois University’s main campus at Carbondale and after transferring to Edwardsville, I found that a commuter campus felt a lot different from a regular “live-in” school.  While “grubbies” were the only things students wore at Carbondale, button-down shirts, slacks, even skirts and the occasional tie were common at Edwardsville, as I said, it was a commuter campus and lots of students had jobs and they showed up to school in their work clothes.

Something else that was different: the various movements, protests, sit-ins,  and student strikes that dominated campus life in the late 60s and early 70s had less of an impact – the students had more to do then just walk or bike from their dorms to classes and back. Not that such things didn’t occur at SIU-E, there were always signs around protesting this or that, sometimes an individual would climb up on a wall and try to motivate the rest of us to do something-or-other, but most of the student body at Edwardsville had one foot in campus life while the other was still squarely in the society from which we were supposed to have dropped out.

The “lead up” to Earth Day was pretty typical; signs were hung around the quadrangle and on bulletin boards were posters, mostly with child-like drawings of the planet with the words, “Earth Day April 22.” Other than that, nothing was promised. After all, what does one do for “Earth Day?” – take a tree to lunch? (tree “hugging” hadn’t been thought of yet.) The war in Vietnam was foremost on the minds of college students in those days and “Earth Day” seemed secondary.

This is not to say that environmental issues weren’t around: Paul Erlich’s 1968 book, “The Population Bomb” predicted mass famines to come due to over-population and it was widely read on campuses around the country. Smog from industrial air pollution was a growing concern and people began to take water pollution seriously when Cleveland’s Cuyahoga River caught fire, followed by the declaration that Lake Erie was “dead.” 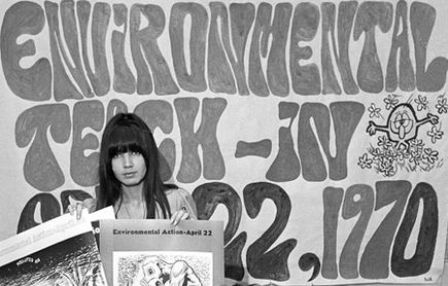 So, it’s not like we didn’t think about the environment at all, it’s just that images of napalm on the nightly news and draft lottery numbers hit closer to home. Besides, I for one figured pollution could be tamed by technical advances and “clean” energy sources like electricity generated from nuclear power plants. (The disasters of 3-Mile Island, Love Canal, and Chernobyl were still years in the future.) Anyway, that’s what was going on in my head approaching the first Earth Day, 44 years ago.

My recollection of the day itself is one of pleasant surprise: when I arrived at school the quadrangle was overflowing with students sitting in the grass, throwing Frisbees, playing music and enjoying what was a beautiful spring day.  Of course some were having serious discussions about the environment, and there were speeches over loud-speakers near the administration building, but I was struck by the fact that people seemed to be taking “Earth Day” as a moment to appreciate and enjoy the earth in the simplest ways possible: feeling the warm spring sun shining in a cloudless sky, you could smell new growth on the breeze.  It was day for which you gave thanks to God.

In the intervening years civic groups and governmental agencies have taken up the cause of preserving the Earth and that’s good. But I am most grateful for the various faith communities that have become involved.  Ideally they are best qualified to translate Genesis 1:28 :

“ God blessed them; and God said to them, “Be fruitful and multiply, and fill the earth, and subdue it; and rule over the fish of the sea and over the birds of the sky and over every living thing that moves on the earth.”

The Oblates of Mary Immaculate’s JPIC is a prime example of a faith-based group dedicated to bringing the promise of Earth Day to fruition: “Justice, Peace, and Integrity of Creation (JPIC) is an OMI initiative to promote an ethic of consistent life, justice, peace, and a clean and sustainable environment for all.”

Faith-based groups understand that God’s admonition to, “…fill the earth, and subdue it…” is not a license to despoil and destroy it. Take the phrase, “Integrity of Creation.”  “Integrity” means “truth” and the truth is that creation is a gift for which we must be good stewards.

People take Earth Day much more seriously than I did way back when and that’s a good thing. We certainly know a great deal more about the environment and the impact humankind has on it. In 44 years Earth Day has entered the consciousness of the world reminded us that the gift of creation is finite. OMI-JPIC and others like them remind us that creation is a gift best preserved through a sense of profound gratitude to the creator.

If need be, you can even re-kindle that sense of gratitude by enjoying an April day, like the one I described earlier. They also occur in May, June, July and every other month of the year, creation is a wonder in all its seasons.