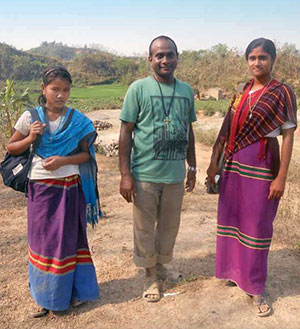 When the Oblates first arrived in Bangladesh in 1973, a country where 85% of the people are Muslims, there were only 300,000 Christians. Priestly formation became one of their first priorities, and before long they opened a seminary and scholasticate in Dhaka. Their efforts have been rewarded: there are currently 50 seminarians, five scholastics and four novices discerning their call to become Oblates. The country is home to 28 ordained Oblates, including a bishop, two missionaries from Sri Lanka and five indigenous priests.

Father Subash Gomes grew up near Dhaka, the country’s capital city. “I have five brothers and three sisters,” he said. “From childhood I had the desire to be a priest.” Before he joined the Oblates, Fr. Subash lived and worked on his family’s farm. “I took care of the cows,” he said. “We knew what hardship was.” The priest, now 40 years old, joined the Oblates after tenth grade and was ordained to the priesthood in 2007.

Today Fr. Subash is bursar for the Bangladesh Delegation. As such it is his responsibility to stay atop the many and varied Oblate ministries – and to make sure each ministry is properly funded. One of the biggest challenges the Bangladesh Oblates face stems from the fact that they have chosen to serve the indigenous poor. Ministry with them is very difficult due to distance and lack of proper communication. To reach the farthest villages the Oblates must walk five to six hours through mountainous jungle, often finding the smoothest path by walking through ankle-deep water in canals.

Education is a priority for the Oblates – especially in regions where the people are deprived of schools. “Education is one of the key ways to break the cycle of poverty,” said Fr. Subash. “The education ministry is so successful that more than 100 indigenous students are now attending college.” The Oblates have opened two large schools in Sunamgonj (1,000 students) and in Kulaura (700 students), as well as smaller schools in 25 remote villages. Students often travel long distances for the opportunity to study at one of these schools. To accommodate them the Oblates opened three hostels in the city of Sylhet – two for boys and one for girls.

The Oblates have also started a Justice, Peace and Integrity of Creation (JPIC) initiative. Through this special ministry the Oblates stand up for the rights of Bangladesh’s indigenous poor people.

The Oblates provide emergency relief when people are victimized by floods, cyclones, hurricanes and other natural disasters. Calamities like these are common in Bangladesh. During one particularly destructive flood in 2003 the Oblates opened their scholasticate to the victims. They emptied the dining room, television room and church verandas so that as many as 200 families could find shelter for a month. Father Subash said, “Once we gave the room, many generous people came to help – God’s providence. People came with meats, oils, vegetables. After their classes, the seminarians served food to the flood victims – 99% of whom were Muslim.” 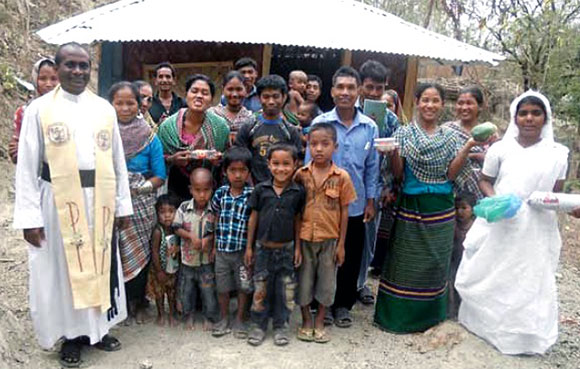 Because the villages in Bangladesh are so remote and far apart, accessing proper medical care is nearly impossible. The Oblates have two shelters in Dhaka where people can stay for better treatment. They also provide basic necessities to the people who live in the slums near the scholasticate. In addition, some 200 persons come to the Oblate scholasticate each week to receive free medication.

Despite their long list of ministries, the Oblates in Bangladesh dream of expanding and doing more to help their people. They hope one day to help migrants develop skills like cooking or sewing so they can find jobs. They want to expand their school programs and hire more teachers.

They also hope to build deep-tube wells to help those affected by contaminated or insufficient water supplies. The Oblates in Bangladesh have been working tirelessly for 40 years to share God’s love. Father Subash reflected on the Oblates’ ministry by saying, “Living the values is our way of preaching.” He continued, “Our presence, our ministries…this is how we reach the people.” (Oblate World – www.omiusa.org, February 2014)