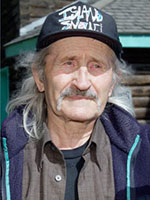 The long trail for Jean-Marie Mouchet, the last member of the Missionary Oblates of Mary Immaculate in the Yukon, ended on Monday, December 2, 2013. He died at 96 years surrounded by friends at the Copper Ridge Place long term care facility in Whitehorse, Yukon. His passing marks another milestone on the collective journey of Yukoners, the end of 115 years of continuous Oblate presence in the territory.

The first Catholic missionary to arrive in the Yukon was an Oblate, Father Gascon, in 1861. But the Oblates would only establish a permanent Yukon presence following the Klondike gold strike. Log and tent churches quickly sprang up in settlements across the territory. Oblates mushed and packed into First Nations seasonal encampments as well. They had their own trail markers to assist them in finding their way. One of the Oblate rules reads, “Whoever wishes to become one of us must have an ardent desire for his own perfection, and be enflamed with the love for Our Lord Jesus Christ and his Church and a burning zeal for the salvation of souls.”

Sharing this charism, many Europeans and North Americans would come to serve in the Yukon, Jean-Marie Mouchet among them. He would join them after his February, 1945, ordination in France. His trail, though, began on May 1, 1917 in Malbuisson, a small community on the edge of the Jura Mountains bordering Switzerland. Early into his teen years he felt a vocation to the priesthood. He pursued this calling with the Missionary Oblates of Mary Immaculate whom he learned about from the adventurous stories told by clergy visiting his family. The Oblates particular call to be “in solidarity with those who are poor and most abandoned in our world” must have attracted him also.

Young, newly arriving Oblates like Jean-Marie Mouchet were met by Jean-Louis Coudert, Yukon’s Oblate bishop. He gave them a toolbox and the charge “to go build the church.” With no experience of First Nations cultures or reality of the country and climate, Fr. Mouchet set out first for Telegraph Creek, British Columbia.

How did he feel charting a new trail for himself? He wrote down the reflections of a 30 year old travelling to his first post in the opening chapter of his 2002 book, “Men and Women of the Tundra.” “Why do I come here? The question is not easy to answer. Am I an intruder? A man with a mission? What is opening before my eyes would certainly reject any attempt at superiority on my part. The land is too strong and too powerful to accept anyone who would come with a will. Humility should shape my attitude. Listening is the only stance.”

Father Mouchet arrived at a time in the north when the world was rapidly changing around First Nations peoples. He came to respect and learn from the strength of the people’s traditions often obscured by visible signs of their material poverty to the outsider. These experiences and the rigors of mountain trails challenged his European categories and claims.

In 1954 Bishop Coudert transferred him to Old Crow. The fact of the Anglican Church being already well established there left him to evolve another way to witness to his faith. In his memoire he tells of his contemplation of and engagement with the people and the land. The exertion of his mind and muscles continued to shape his unique vision of a way he could be present to the people of Old Crow and the North. His well-known Territorial Experimental Ski Training Programme (T.E.S.T.) emerged which would leave a legacy of Olympians, community leaders and many healthy, grounded adults.

In our increasingly “polluted and overcrowded” world he saw “the idea of a simple life” with a “balance between nature and man” revealing its value to him in this isolated northern community. However he saw the intrusion of negative aspects of the modern world and its technologies threatened it and ultimately all of us. With his Oblate zeal, whether in Old Crow, Teslin, Whitehorse or Carcross, he refused to give up, despite the forces working against his dream. 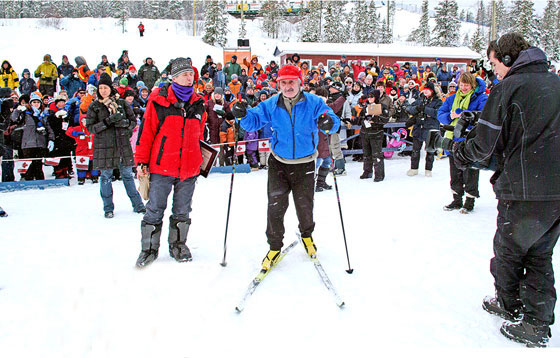 Even in his last months, Pere Mouchet continued to seek ways to energize initiatives to engage youth. New proposals, reworking of old ideas preoccupied him. Physically he always challenged himself as he did the generations of youth with whom he worked. At 93 years of age he set a goal for himself of skiing 2000 kilometers over the winter season. He achieved this and much more with his faith-filled determination.

Father Mouchet, zealous, faithful, visionary and activist, remained in his adopted land until the end of his trail. He, as the many other Yukon Oblates before and after him, came following the lived example of the Oblate founder, St. Eugene de Mazenod. He chose to offer his life in service, faith and prayer among us. He truly lived the pledge as the Mission Statement of the Anglo-Irish Oblate province in part reads, “We commit ourselves to building a new society in the light of Gospel values – a way of being where justice, peace, love, forgiveness and hope are commonplace.” Mahsi’choo, merci and thanks Father Mouchet! (Michael Dougherty)