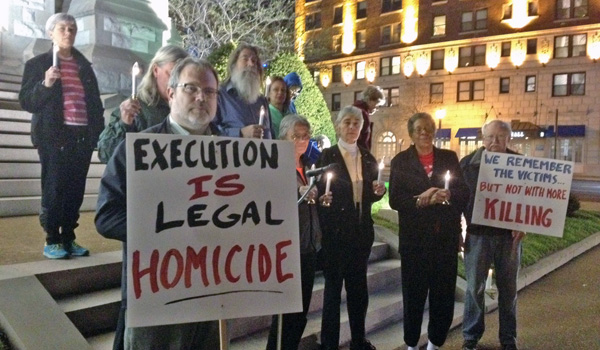 My head is replete with reasons to oppose capital punishment. They include: the nonviolent teachings and example of Jesus, my own Catholic church’s doctrine, the number of people have been removed from death row after being proven innocent, unequal sentencing (by race, economy, geography or gender), its ineffectiveness at reducing violence, the fact that execution costs a state more than life in prison, and a consistent downward trend both internationally and within the United States.  Recent debacles with “botched executions” only further constitutional objections. Wouldn’t it make more sense for a convicted murderer to spend significant time making restitution to the victims, however impartial? Last, as a person of faith, I am unwilling to accept that there is anyone for whom there is no hope of transformation – not even a murderer.

I am not yet Christian enough to claim compassion for murderers who are sentenced to death.    But this is where discussion of capital punishment often bogs down.  We argue over guilt and punishment for the worst criminals, over the most heinous crimes.  This blinds us to the “collateral damage” of enacting capital punishment.

Many people other than the prisoner need to be considered, especially family members and loved ones of the person executed.  Family and loved ones of murder victims may be placed at odds with their family members who believe differently about the death penalty.  What is the emotional cost to jurors and legal officials who are tasked with the onerous decision of judging who, if anyone, deserves capital punishment?  What of correctional and pharmaceutical employees who feed their families, in part, by providing the means and the materials of execution? We all breath the air of a society which models violence as an acceptable response to a criminal who is already reliably imprisoned.  How numb shall we become in the name of vengeance?

These convictions and questions recently led me to participate in a prayer vigil on the eve of an execution in my neighboring state of Missouri. Out of respect for the victims of the offender and their family, I read extensively about the case. It did not increase any Christian compassion towards the man scheduled to be executed.   The crime as reported was particularly heinous; his guilt was not reasonably questionable.

And so it began.  About sixteen of us gathered on the steps of St. Francis Xavier Church in St. Louis, holding candles, interspersing silence with occasional statements over a small amplifier.  The first task was to acknowledge the reality of the crime, and respectfully to name not only the victims, but their family members – people I had not previously seen acknowledged.  Many shared beliefs and reasons for being there.  Despite the floodlights all around us at the church steps, this was no stage. The subject matter was not a mere show, but the state-sanctioned killing of a human being.

The hour-long vigil ended, announcements and farewells were voiced, and four of us prepared for the next stage of witness that evening.  We carpooled to the prison in Bonne Terre where the execution would be held.  It suddenly became more personal when we joined forces with the wife of another man on Missouri’s death row, arriving at the execution site an hour before the scheduled midnight event.  Prison guards quickly and politely showed us the roped-off, grassy outdoor place where we were allowed to remain. There was a small buffer between ourselves and a similar site reserved for those who supported the executions, a space which would remain empty.

Thirty minutes before midnight, we were joined by three women: a sister-in-law, niece, and great-niece of the man on death row.  The presence of family at such a vigil is quite uncommon, according to regular protesters.  It was now very personal.

What does one say to someone who is standing with you in the cold, weeping, waiting for a healthy loved one to be killed on schedule?  I said nothing, but listened to others who offered condolences, and listened to the family members, who offered alternative views to the crime and the criminal roles and punishments presented by the press.  Those familiar with the execution process shared their knowledge with the family members. Midnight approached and we all grew very silent.  We turned and faced the prison and remained that way until the guards returned a little later and stated that that it “was over.”  When a protester asked “so you’re saying that you successfully killed the prisoner,” no reply was given.

A few more condolences, however insufficient, were given to the three relatives.  I offered mine as well.  We left in the separate vehicles, remaining silent among ourselves for most of the trip back to St. Louis.

When I finally arrived home that morning, I knew two things.  First, that the State of Missouri had, for reasons unfathomable to me, forced unspeakable shame and pain on innocent family members of the man they executed that morning. This was made all the more apparent when an execution witness – a family spokesperson of those murdered in the original crime – stated that the execution brought no peace or closure.  Second, I knew that out of respect for all persons who are “collateral damage” of state executions, I would return to Bonne Terre to protest and pray for them.  If family members come, they will not be alone.  I’ll also pray for the one executed – as I did this time – but with a greater compassion than I had this night.  As I said, I’m not yet Christian enough.