I should have been prepared for what I saw live, on television, noon CDT, May 25, 2014.  After all, I had been a newly ordained priest finishing my studies in Rome, when Pope Paul returned from his visit to the Holy Land on January 6, 1964.  My classmates and I glimpsed him  when he traveled from the Rome airport through the center of the city on his return, and then were able to get to St. Peter’s Square and hear him describe his experience.  With a tremor in his voice, he said “After so many centuries, the Bishop of Rome and the Patriarch of Constantinople have embraced.”  Within a year, the two had lifted the infamous mutual excommunications of 1054  between the Eastern Orthodox Church and the Roman Catholic Church. 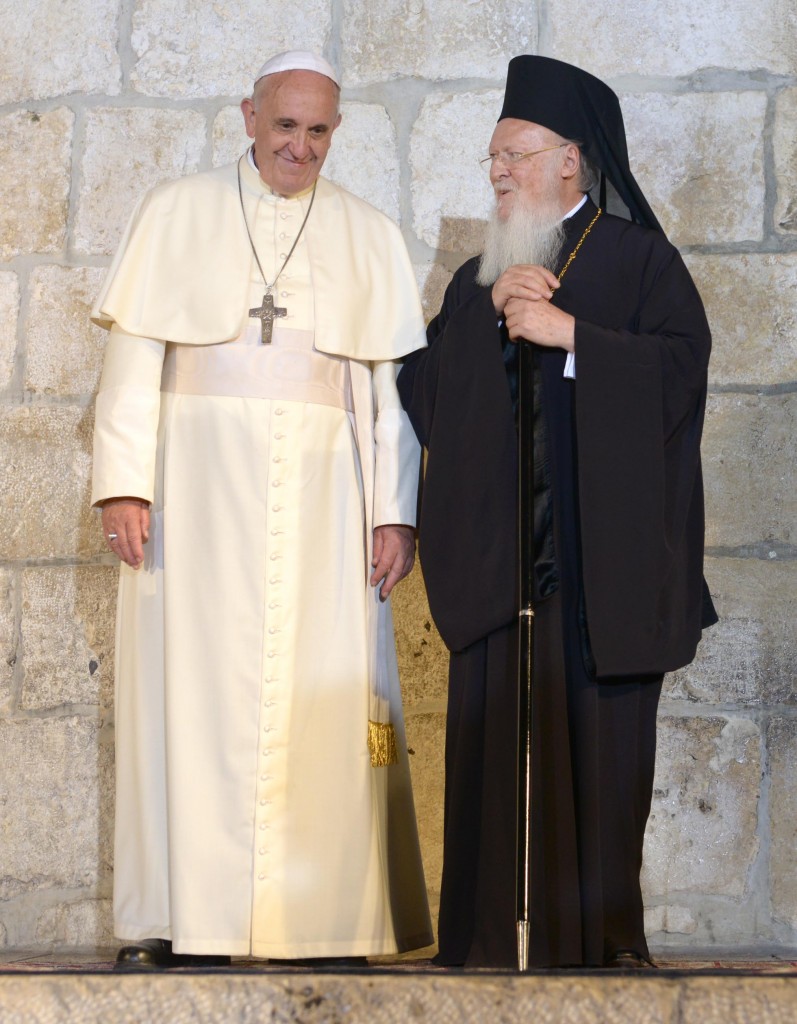 commentator American Greek Orthodox Rev. Dr. Thomas FitzGerald, speaking from the Vatican.  We watched with great interest as Pope Francis and Patriarch Bartholomew venerated the Holy Sepulchre side by side, kneeling before it and kissing the stone.  They had entered from different sides, the pope from the east and the patriarch from the west.  As they sat side by side in identically large chairs, the pope on the left of the viewer and the patriarch on the right, the Resurrection account of the Gospel of St. Matthew was chanted in Greek, and the patriarch gave an address in clear English, going out of his way, it seemed to me, to cite the famous passage of Jn 17:21 in Latin, “ut unum sint,” that all be one (which the official translation does not include).

When the patriarch returned to his chair, Francis reached up for his hand and kissed it.  Terry Mattingly, writing as the National Education Association Religion Columnist, noted “an act that in these ancient churches shows respect for a man’s priesthood, since he holds the consecrated bread and wine during the Holy Eucharist” (May 30, 2014, p. 7, Evening Sun, Norwich, NY).  What I noticed even more strongly was that Francis almost pulled Bartholomew toward him to embrace him and the patriarch quickly leaned over to return the embrace.

After the Resurrection account of St. John was chanted in Latin, Pope Francis gave his address in Italian, going out of his way, it seemed to me, to include the Greek Easter greeting “Christos anesti!” Christ is Risen! When he returned to his chair, the patriarch was already standing to embrace him warmly.  It was also evident during all the movement into the tomb area, and then into the chapel, that the 77 year old Francis was having trouble with the stairs, with kneeling, and with rising from his chair.  With the kindest of smiles, the 74 year old patriarch helped him when they were close together. 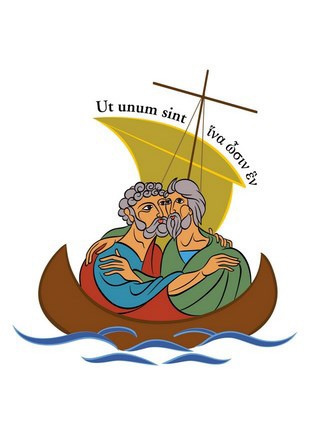 Please read the address of the pope, and the address of the patriarch.  They are short, inspiring, and filled with the Holy Spirit, as is their Common Declaration.  You may read them by clicking HERE The website includes these statements, and so many photos along with the marvelous logo developed for the papal visit to the Holy Land, their Common Declaration and the two addresses.

Yes, there were two miracles on May 25.  One was that of modern technology, enabling us to watch the live broadcast.  The second and more important was the behavior of pope and patriarch, each going out of his way to praise the person and Church of the other.  Even more important than their two addresses is their attitude of love and respect for the other.

Now they have gone a step farther, asking for an Ecumenical Synod at Nicea in 2025, to commemorate the First Ecumenical Council of 325.  It is also interesting to note that as the Patriarchs in union with Rome prepared to accompany the pope to the Holy Land, they asked that all Christian leaders consider a common date for Easter, instead of the three different dates various Christian Churches use most years.  The date they have recommended is the second fortnight of April.

Clearly, Christian unity (Ecumenism), especially with the Eastern Orthodox Churches, is now on the front burner for Oblates and all those interested in the New Evangelization.