Recently, Fr. Ken FORSTER, provincial of OMI Lacombe Province in Canada, returned to Kenya where he had served as a missionary several years ago. Here is an excerpt from his report to his province. 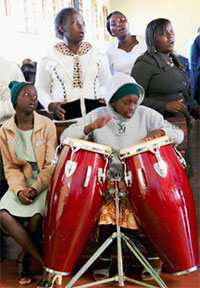 Fr. Gideon RIMBERIA, a Kenyan Oblate ordained less than two years, will be the pastor of the new parish in Kisaju. They have many needs. Kisaju, which is a fast growing community relatively close to Nairobi, has been chosen as the place to establish the parish centre. Without a church, the community celebrates Sunday Mass in a nursery classroom that is overflowing. They are negotiating to get a few acres of land from the Catholic-sponsored school. The Oblates are presently renting a house as their residence in the mother parish but will move shortly to Kisaju itself, and look to rent there. They will be working with many tribal groups but predominantly with the Masai.

The area is very dry, so water will be a major concern. Their collection from this emerging parish has been 300,000 ksh in the last six months or about $3600, but they often receive considerable food and vegetables in the sadaka (offering). They often have enough to share with a shelter for women that is run by nuns and served by the Oblates weekly.

A newly ordained Oblate from the Mission of South Korea, Fr. Sam HONG, has received his first obedience from the Superior General to serve in Kenya. He arrived in April.

All members of the mission community met in our formation house in Karen, Nairobi, for three full days. It was a time of prayer, sharing of ideas, wrestling with choosing a common path, planning the future and discerning leadership for the mission. Fr. Jim FIORI has been re-appointed for a second term at the last Provincial Council meeting in Vancouver. His two councillors are Fr. Faustin LITANDA and Fr. Gideon RIMBERIA.

We discussed concerns regarding formation. We have three scholastics in theology, one in novitiate and six in pre-novitiate studying philosophy. We project that we may have ten young men joining as postulants in Meru. How can we give them the best formation as wholesome young men, as Oblates, to become saints as St. Eugene desires?

There are many development projects taking place in Kenya. Highways and major circular roads in Nairobi are being built with Chinese government grants. There also seems to be the development of a middle class able to purchase vehicles, especially motorcycles, even in the rural areas like Kionyo. There is a new asphalt road from Chogoria through our Kionyo Parish to Meru town. What a big change from the roads we drove on sixteen years ago! Traffic is very heavy on the highway from Nairobi north. Pray that we don’t lose any of our Oblate brothers as people are impatient and pass in dangerous situations.