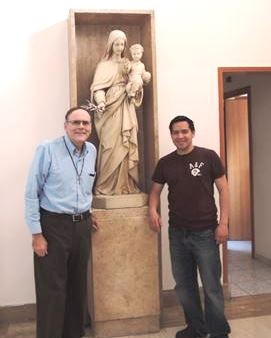 A bus strike in the city on Friday, May 30 may have snarled the traffic somewhat, but my hotel was only two long blocks from the Casa Generalizia OMI, so a leisurely walk brought me to the Oblate General House on Via Aurelia 290, in close proximity to the Vatican.

When I attended the OAMI Gathering in Belleville, Illinois in early May, Father Jim Allen put me in touch with Father Marco Tony Ortiz who resides at the General House. Asking for Fr. Tony, I identified myself at the gate and I entered the grounds. I walked up the pathway to the House amongst a beautiful landscape of flowers and trees. Upon arriving, I was met by Fr. Tony, who knew my hometown very well having studied at the Novitiate in Miramar, Florida on the grounds of St. Stephen Protomartyr Church years ago. I spent a very pleasant afternoon visiting the House including a visit to the St. Eugene de Mazenod Museum which housed many of his vestments, books, bibles and personal effects. A visit to the beautiful chapel and an incredible view of the City of Rome and Vatican City from the House’s rooftop was also a highlight. I left Fr. Tony with our St. Eugene Prayer Card that we Associates designed and distributed to all of our parishioners when our Oblates left the state of Florida.  Fr. Tony invited me to attend 9:00 A.M. Mass in the chapel on Sunday and I said I would be there. 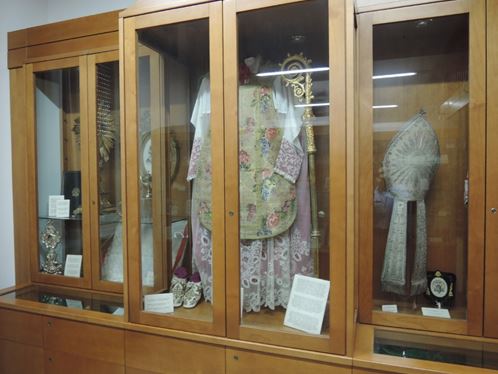 On that Sunday, I invited Angela and Cristina, a mother and daughter from Toronto, Canada who was in my Italy tour group to join me at Sunday Mass at the General House. So, another leisurely walk in the early morning sunshine and we were back at the Oblati Di Maria Immaculati General House. Prior to Mass, I was so blessed to unexpectedly meet the Superior General, Fr. Louis Lougen, O.M.I., at the doors to the chapel. I introduced my guests, then spoke to him a short while about how we, as Oblate Associates in Miramar, Florida, are helping the poor and most abandoned in our area and also talked about my experience at the recent OAMI Gathering.  Fr. Lougen seated us in the chapel (seats were assigned) and prayer service began at 9:00 A.M., followed by Holy Mass in Italian with the residing Oblates in attendance. Following the Mass, Fr. Tony and I spoke again briefly and he was happy to see that I was able to return for Mass. So was I! 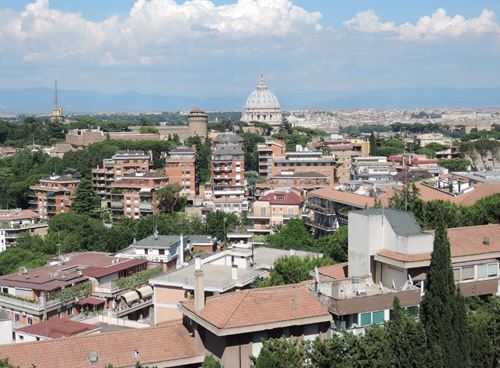 After Mass, the three of us continued our Sunday walk to Vatican City and to St. Peter’s Square to see Pope Francis for the 12 Noon Angelus. The Square was full of pilgrims from all over the world with signs and banners as well as lots of tourists just like us. Pope Francis spoke from the top floor above the Pope’s Residence (although Pope Francis does not live there) and appeared to all as a tiny figure in the window high above the crowd. However, several jumbo TV’s were in place throughout the Square, so a close-up view of the Pope was not too far away from where we were standing. After the 15 minute service and blessing, the crowd slowly dispersed and everyone went our separate ways.

My opportunity of visiting the Oblate General House, meeting Fr. Tony, Fr. Louis and all of the Oblates, attending Mass in the chapel and seeing Pope Francis in person went far beyond my highest expectations. I am truly blessed to be a Roman Catholic and an Oblate Associate of Mary Immaculate. 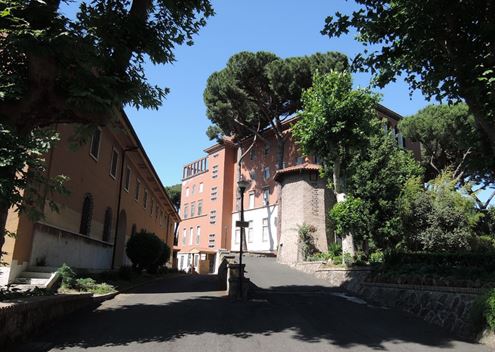