By Michael Viola, this will appear in the October 2014 Issue of OMI WORLD Magazine 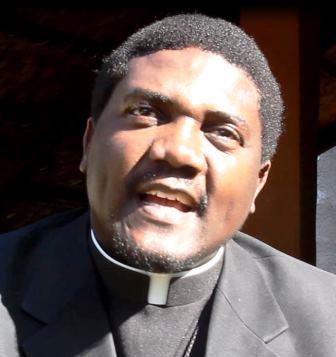 Father Kennedy Katongo, O.M.I. believes it should never be “normal” for someone to live in poverty or oppression. As the new Director of the Missionary Oblates’ global Justice, Peace and Integrity of Creation Office, Fr. Kennedy says his overriding goal is to empower poor people so they can change their lives for the better.

“Working for peace and justice is an opportunity to be a true witness of Jesus Christ,” said Fr. Kennedy.  “We need to intervene in the system so that justice can prevail and people can have a better life.” Father Kennedy takes great pride in knowing the Oblates do not sit on the sidelines when they see injustice.  Instead, they intervene – often at great risk to their personal safety.

Father Kennedy has been a priest for only four years, but improving the lives of the poor was a priority for him long before ordination

Born in Zambia in 1980, as a young man Fr. Kennedy was part of the Oblates’ Youth Alive Zambia program.  He was involved in projects to prevent the spread of HIV/AIDS, and to reduce child abuse, unemployment and poverty in his community. Growing up in the Western Province of Zambia, Fr. Kennedy said poverty was simply accepted as a fact of life by many people.  Most families live on about one dollar a day, and the lack of education and job opportunities make it nearly impossible to break the cycle of poverty.

Father Kennedy said people who live in poverty for so long begin to feel that it is normal to exist in such a manner.  “Having access to clean water, medical care and schools should not be abnormal,” said Fr. Kennedy.  “It should be a right of everyone, even the poorest of the poor.”

As an Oblate seminarian Fr. Kennedy worked with the Catholic Commission for Justice and Peace on issues such as trade and debt in Zambia, human trafficking and access to clean water.  As a student in the United States he worked with the U.S. Justice, Peace and Integrity of Creation Office in Washington D.C. as they tackled the challenges of climate change, immigration and the plight of refugees. As a priest Fr. Kennedy has worked in both parish and youth ministry programs, in addition to serving as Director of the Justice, Peace and Integrity of Creation program in Zambia.

Father Kennedy has not been shy about speaking out against injustice in his country – and government corruption.  He referred to corruption as a “national sport” in Zambia, and called out government officials who were stealing state resources for their own personal gain. “Let us ensure we vote for leaders who will secure meaningful development and not development that is just on paper,” said Fr. Kennedy in a national newspaper prior to an election in 2011.  “Zambians must refrain from voting for leaders without integrity.”

Leading a worldwide peace and justice initiative means that Fr. Kennedy will attend events at such high profile places like the Vatican, the World Bank and the United Nations.  But Fr. Kennedy doesn’t strive for elite status.  He has a more humble and tangible goal.

“As an Oblate I have made a commitment to give the poor the best that I have to offer,” explains Fr. Kennedy.  “We only succeed when we can say that we made somebody’s life better.”