The Second General Assembly of the Oblate Associates of the Province of Cameroun was held in N’djamena, Chad from 24-29 May 2014.

The group of the Oblates’ Lay Associates began in Cameroon in 2008 with Fr. Edouard DAGAVOUNANSOU as the Oblate in charge of its formation on the spirituality and charism of St. Eugene de Mazenod. This group has continued to grow and expand rapidly, now under the watch of Fr. Charles EKO. It is one of the strongest and most deeply rooted sodalities in the Church in Cameroon, at least in the dioceses where the Oblates work and in parishes where they serve and even in those parishes that have been relinquished to the local clergy.

The opening Mass was presided by Fr. Eko in Blessed Cyprian Michael Tansi Parish. In his homily, Fr. Charles emphasised strongly the role that every Christian is called to play in ensuring that the mission entrusted to us by Jesus continues; this mission will succeed only if our lives, actions and words are in perfect sync with the life of Jesus.

During the meeting, the group evaluated its activities over the previous two years. To help with the evaluation process and bring all the participants to see the need for a change and an imperative advent of a more reinvigorated, community-centred activities, Fr. Nicolas NGARTOLNAN spoke on the theme, “A New Heart: life in Apostolic Community”. 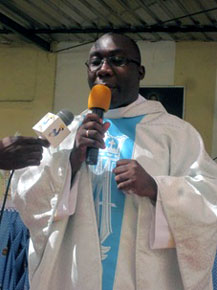 Other presenters were Fr. George King BABOU who spoke on the theme, “Together for the Mission”; and Brother Jean-Marie DIAKANOU whose focus was on the Oblate Triennium.

The Provincial of the Province of Cameroon, Fr. Raymond NANI, greeted all the participants and read to them the letter of the Superior General in which he thanked the Associates for having found our spirituality appealing by embracing it with assiduity and dedication to collaborate in the Mission of Christ. The Provincial, on a personal level, stressed the importance of the Associates in the life and mission of the Province and promised collaboration with them.

The Associates themselves offered some concrete resolutions amongst which: good behaviour, love of and in the family, active participation in the life of the Church, respect for one another and especially the other who is different. (Emmanuel Youngten TEMSWANG)