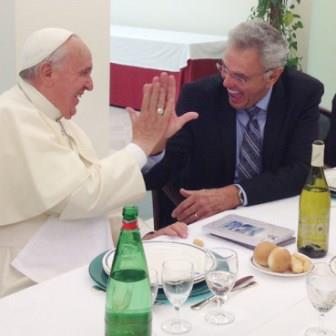 What does it take to produce the first-ever papal high-five? A meeting with American televangelists, apparently.

The gesture came during a three-hour meeting of Pope Francis and Texas televangelists Kenneth Copeland and James Robison, just weeks after the pontiff met with televangelist Joel Osteen and other religious leaders. At the June 24 meeting, Robison said he was so moved by Pope Francis’ message of the gospel that he asked the translator to ask Francis for a high-five. The pope obliged, raised his arm and the two men smacked hands.