The missionary Fr. Mario Borzaga, a catechist and 15 other missionaries are being fast tracked by the Congregation for the Causes of Saints 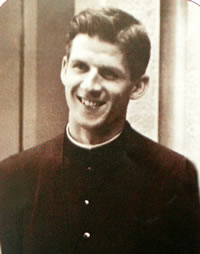 The small communist south-east Asian nation of Laos will have its very own martyrs, possibly within just a few months. Two parallel processes have begun for a group of religious, missionaries and lay people which have been split down the middle: the missionary Oblate of Mary Immaculate (OMI), Mario Borzaga and the Laotian catechist Paul Thoj Xyooj killed in 1960 on the one hand and 15 martyrs including missionaries and lay catechists killed in Laos between 1954 and 1970 on the other.

Angelo Pelis, OMI, is Postulator for the Cause of Borzaga-Thoj Xyooj. He completed Borzaga’s “Positio” (a 480-page document) last April, after which it was reviewed and approved by the relator for the cause, Jozef Kijas. The Congregation for the Causes of Saints published the “Positio” (a text which presents evidence to support a cause for beatification, Ed.) on 9 June. Forty copies were printed and sent to a group of theologian advisors and cardinals to be examined. “Documents were gathered with a view to prove the martyrdom of the two servants of God,” Pelis told Vatican Insider. Once their martyrdom has been recognized, the beatification process can start. “Given Borzaga’s spiritual stature, emphasis was placed on his vocation for the sainthood, proof of which is to be found in his writings.”

A second process has been started for fifteen missionary martyrs, including five French OMIs, five religious from the Missions Étrangères de Paris (MEP) and five Laotian lay people. The bishops of Laos are backing the process which has been entrusted to the Diocese of Nantes, the home diocese of one of the MEP missionaries, Fr. Jean-Baptiste Malo. Their “Positio” is in the hands of the Postulator for the Cause, Fr. Roland Jaques (OMI).

Pelis said that the Secretary of the Congregation for the Causes of Saints, Marcello Bartolucci, stressed: “We won’t keep you waiting. The causes of Borzaga-Thoj Xyooj and the 15 martyrs from Laos promoted by the Bishops of Laos and presented simultaneously despite being two separate processes, will be fast tracked.”

The Bishops’ Conference of Laos and Cambodia (CELAC) are over the moon and hope to pay an ad limina visit to the Vatican very soon. The last one took place in September 2007. Laotian pastors (the Laotian Church had four apostolic vicariates) hope that the much-awaited meeting with Francis and representatives of the Curia dicasteries will take place by 2015, partly so they can get direct feedback on the progress of the two processes. Were the sainthood of figures like Borzaga and other martyrs to receive universal recognition, the small flock of Laotian faithful (0,9% of the population), may take this as a strong sign of encouragement, they explained.

Mario Borzaga was born in the northern Italian province of Trento on 27 August 1932. He joined the Minor Seminary at the age of 11, the Missionary Oblates of Mary Immaculate when he was 20 and was ordained a priest when he was 25. On 2 July 1957 he was sent to the Oblate mission in Laos, as part of the first group of Italian missionaries. When he arrived in Paksane, a small city on the banks of the river Mekong (not far from the capital, Vientiane), Borzaga spent his first year there studying Laotian so he could start communicating with people as quickly as possible. In his diary titled “Diary of a happy man” and in the many letters sent from Laos, he described his soul’s journey and what life was like on this difficult mission, made all the more arduous by the communist guerilla movement present throughout the country.

Towards the end of 1958 he visited the Christian community in the small hmong village of Kiucatiàm. During his visit he met with families and cared for the crowds of sick that would gather at his door each day. After mass on 24 April 1960 somehmong asked him again to visit their village, Pha Xoua, a three day walk across mountainous terrain and through the thick tropical forest. It was a two-week missionary journey would which he had to complete before the start of the rainy season.

Fr. Mario set off on what was to be the journey of no return on Monday 25 April, accompanied by the young catechist Paul Thoj Xyooj. The two vanished never to be found again, despite searches being carried out. The testimonies gathered right from the start along with those received in recent months, have confirmed what everyone had known all along: the two were killed by Pathet Lao communist troops.

Pathet Lao is still the state’s official name today. Although the Laotian government has always been communist, it has taken some big steps forward: its Constitution recognises the right to religious freedom and in 2009 it ratified the international UN Covenant on Civil and Political Rights. Nevertheless, non-governmental organisations like Human Rights Watch for Lao Religious Freedom continue to report cases of abuse against Christians and frequent deprivation of religious freedom.