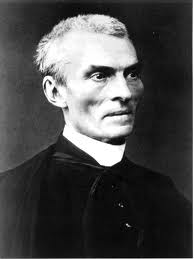 Saint Peter Julian Eymard was born in France in 1811.  At the time of his First Communion, he knew he wanted to be a priest, but his father disapproved.  So the boy studied Latin on his own, with the encouragement of a Missionary Oblate priest, Fr. Touche.

The young man persisted in his calling to the priesthood and eventually entered the novitiate of the Missionary Oblates, an order of priests that was just a few years old at the time.  Eymard was overjoyed and wrote the following about joining the Oblate family:

“I remember the day I entered the novitiate of the Oblates of Mary Immaculate as if it were yesterday.  The founder, Father Eugene de Mazenod, was very sick and we prayed for his recover…  It was here that I learned to make the Eucharist the center of my life and I grew in deeper love of Jesus in the Eucharist.”

But Eymard’s time at the novitiate was short as his health failed and he was sent home to die.  He recovered and with the help of Bishop de Mazneod was able to enter the diocesan seminary where he was ordained in 1834.  A few years later he joined the newly formed Marist Congregation where he rose quickly to important posts in the society.  He earned a reputation as an outstanding preacher of Eucharistic devotions, such as the Forty Hours.

Although he loved being part of the Marist community, Eymard felt called by God to establish his own community dedicated to promoting the glory and reign of Jesus through the Eucharist. In 1856 he was granted permission by Pope Pius IX to create the Congregation of the Blessed Sacrament.

One of the primary functions of the new congregation was to prepare people for First Communion, especially adults.  Eymard viewed the Eucharist as Christ’s gift of self out of love for us.  The congregation was not limited merely to the worship of the holy sacrament.  Members were also actively reaching out to those who were estranged from the church and to evangelize them.

But through determination and perseverance the congregation began to take root.  After Fr. Eymard died in in 1868, the work of the congregation expanded prodigiously.  Today there are nearly 1,000 members ministering in 29 countries on six continents.

In 1962 Pope John XXIII canonized Eymard at the end of the first session of the Second Vatican Council.  Pope John Paul II would later established August 2 as the feast day of St. Peter Julian Eymard, the Apostle of the Eucharist.