On 2 August 2014, the Nazareth community in Wennappuwa celebrated the 25th anniversary of ordination of its superior, Fr. Sarath PERERA. On that occasion, the city of Wennappuwa formally named a road after the Oblate Founder, St. Eugene de Mazenod. Present for the dedication were Fr. Clement WAIDYASEKARA, General Councillor for Asia-Oceania, and Fr. Rohan SILVA, Provincial of the Colombo Province, as well as the Chairman of the Town Council and other Oblates. 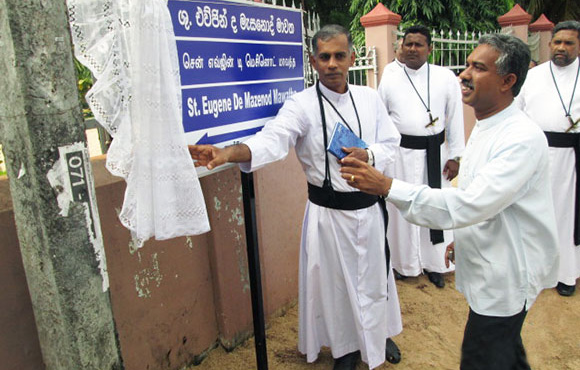 In 1847, the Founder sent three Oblate priests and a Brother to what was then known as Ceylon, at the request of the Vicar Apostolic of Jaffna, Bishop Orazio Bettachini. St. Eugene hoped to see the whole island evangelized by his Oblates. Before he died in 1861, he had sent a total of 31 Oblates: 22 French, 4 Irish, 4 Italians and one Belgian.

The Oblates have had a tremendous impact on the history of the Catholic Church in Sri Lanka. Today, there are two Oblate provinces in Sri Lanka itself with a total of nearly 250 missionaries; Sri Lankan Oblates can also be found working in many other Oblate provinces, delegations and missions.

The early history of the Oblate presence in Sri Lanka was charged with difficulties: languages to be learned; different cultural realities even within the country; misunderstandings with the bishops and the clergy; outbreaks of fatal diseases; the reality of a Church that was a tiny minority in the country; the schism of some priests from Goa. Nevertheless, the Oblates stayed true to their charism and succeeded in becoming one of the major forces in the development of the Church on what the great Italian explorer, Marco Polo, called “the most beautiful island in the world.” 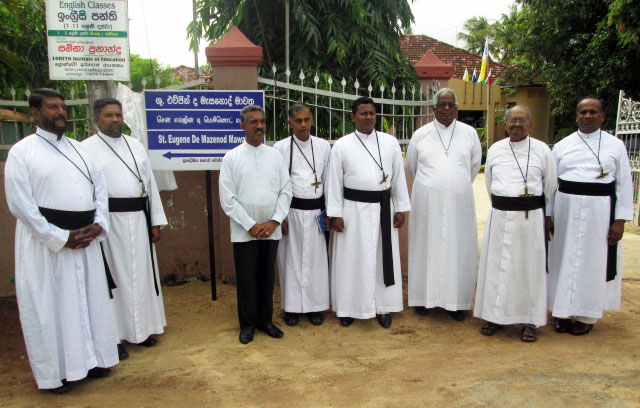 It is logical that a road be named after the Oblate Founder in Wennappuwa. The parish there is the largest in the country, with more than 6000 families. The Oblate who greatly developed the parish was Fr. Constans CHOUNAVEL (†1923) who had been sent there by the Founder himself. The parish has given the Church some 28 priests and more than 35 sisters for various dioceses and religious orders.

The Oblate Preaching Band of the Colombo Province is also located in Wennappuwa. This preaching community has, for more than 65 years, had a significant impact on the Church of Sri Lanka.

As a sign of gratitude to the Founder of Missionary Oblates of Mary Immaculate, St. Eugene de Mazenod, the Wennappuwa Town Council proposed to name a road for him because of his outstanding love, especially for the Catholics of Wennappuwa. (Fr. S. Randil FERNANDO and Oblate Historical Dictionary)