Originally Published in the OMIUSA Newsletter and re-published on OMIWORLD.ORG

A ministry which the Oblates began 66 years ago has come to an end, as they leave the Shrine of Our Lady of Grace in Colebrook, New Hampshire.

Reflecting on the beginning of that ministry, Bro. Richard P. COTÉ recently wrote: “In the fall of 1948, I arrived at the novitiate in Colebrook to begin my studies and training as an Oblate Brother. “At that time the novices were building an outdoor shrine to our Blessed Mother as a thank you for the countless blessings she had bestowed on our Congregation.

“The new shrine was soon dedicated to Our Lady of Grace at an outdoor service presided over by the bishop of Manchester, NH. The music was created and delivered by the Van Trapp family singers, who came as a personal favor to Fr. Alphonse BREAULT, who was assigned there at the time.”

Fr. Adhemar DEVEAU, then the Shrine director, wrote in 1999, “Pilgrims are mostly seniors, Haitian communities and other communities of immigrants still fairly strong in their faith. … Our service is towards poor communities.”

In1976, bikers (motorcyclists) started coming to the Shrine for an annual blessing. They began donating time, energy and finances towards further development of the Shrine, donating in 1986 a statue entitled Motorcyclists in Prayer. In 1991, they unveiled a Memorial of Military Personnel from the U.S. who served in Operation Desert Storm. Then in the fall of 1991, they built a 20 foot campanile, surmounted by a large cross.

On 24 March 2014, Frs. William ANTONE and James TAGGART sent almost 1,000 letters to various places in the U.S. and Canada, explaining what was transpiring and expressing appreciation to those who have supported and visited the shrine through the years.

The Shrine had an abbreviated 2014 season beginning on Mother’s Day, 11 May, and closing on 1 July. Fr. Henri DELISLE, the remaining Oblate in residence, offered daily Mass as long as he was there.

The Blessing of Bikes took place on Sunday, 29 June. A final Mass of Thanksgiving was celebrated at the Shrine on Sunday, 13 July, followed by a reception. (OMI USA May 2014) 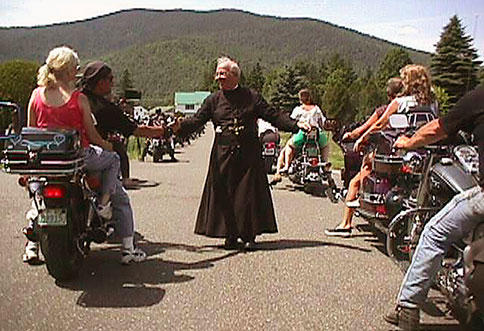 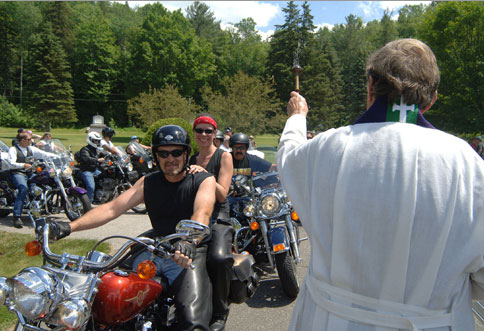