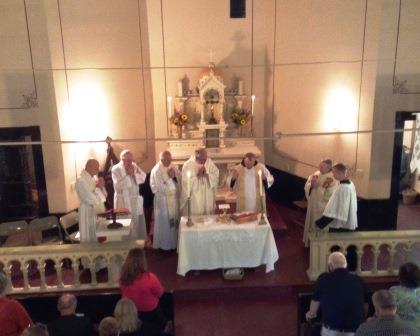 Beginning in 1976, Oblates pastored Monroe County, WV.  Following the departure of the Oblates in 1991, Mass was offered by diocesan priests from nearby Greenbrier County until 2004, when the bishop, due to a shortage of priests, allowed Mass only once a year, on the Feast of the Assumption.  This August 15, I was able to join five other priests for the Mass, which is held in the oldest Catholic Church west of the Alleghany Mountains, St. John’s Chapel, Sweet Springs, WV.

The most priests celebrating on Aug 15 until this time were four.  Presiding at the Mass was Fr. Jim Conyers, a former Methodist and Episcopalian pastor, who was ordained to the Catholic priesthood on June 28.  For the missionary implications of Episcopalian priests such as Fr. Conyers becoming Roman Catholic priests, see www.harrywinter.org, bottom of the home page. 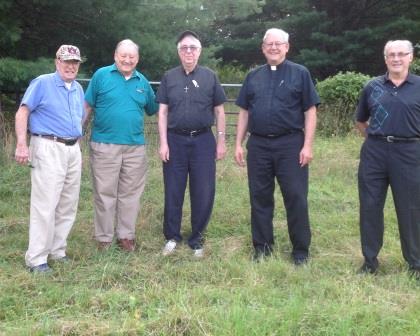 Also concelebrating was Msgr. John Williams, a retired priest of the Diocese of Raleigh, NC, who was a great friend of our former superior general, Richard Hanley.  Father Tom Collins, a priest from the Diocese of Richmond, VA, had served in the Virginia parish next to Jenkins, KY, and knew its pastor, the late Fr. Ed Randall OMI very well. Two Discalced Carmelite priests from their retreat center near Hinton, WV also joined:  the superior, Fr. Bonaventure Lussier OCD, and the youngest priest present, 37 year old Fr. Emmanuel OCD.

Before the Mass, several of us visited the historic cemeteries on the knoll across the road from the chapel. Buried in the front cemetery, the Lewis Family Cemetery, is Governor John Floyd Jr. (1783-1837)   and his wife, Letitia Preston Floyd (1779-1852).  A most welcome participant in the visit to the Lewis Family Cemetery was Dr. Jim Glanville PhD, from Blacksburg, VA.  Out of a clear, blue sky, he contacted me last January 2, telling me of his amazement about the influence of Mrs. Floyd, especially her allowing her children as teens to become Catholics, and her extensive correspondence, largely unedited, with Bishop Richard Whelan, second Bishop of Richmond, VA, and first Bishop of Wheeling, WV. 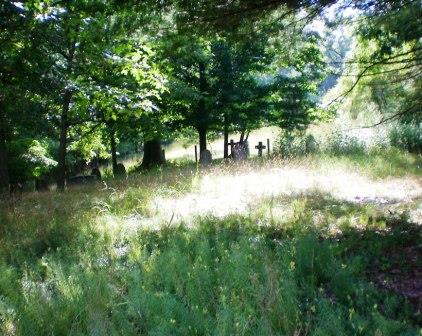 He had stumbled onto the internet on an article I wrote back in 1990, “Letitia Preston Floyd, Pioneer Catholic Feminist.”  He explained to me that he was submitting to a Virginia historical journal, an article on Mrs. Floyd’s eventual conversion.  (See www.harrywinter.org, Oblate Missiology page for my 1990 article, and the suggestion that Mrs. Floyd may be an Oblate missiologist).

We had been told that the Lewis Family Cemetery had not been cared for since 2012, and it was distressingly true.  He then said that although he was not a Catholic, he knew from his extensive teaching experience at Virginia Tech University, Blacksburg, VA, that the Newman Club there was looking for service projects.  He volunteered to contact the chaplain of the Newman Club and begin the process of restoring both the front Lewis Family Cemetery, and the Old Catholic Cemetery behind it, on the knoll. 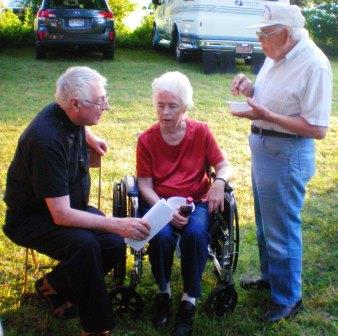 Also participating in the Mass were the Knights of Columbus from Greenbrier County, who have been very influential in having the chapel open for the Feast of the Assumption, for a Memorial Day service, and for Wednesday evening rosary during the summer.  The Knights will probably work with the Newman Club and Dr. Glanville in restoring the cemeteries, thus making Mrs. Floyd’s leadership in the Catholic Church better known.

Twenty flyers were distributed describing the Oblate Associates, and 20 describing St. Eugene De Mazenod as patron of dysfunctional families.  If an Oblate Associates group is formed in our former parishes in WV, perhaps they will make Letitia Preston Floyd and her influence as a pioneer Catholic feminist better known. 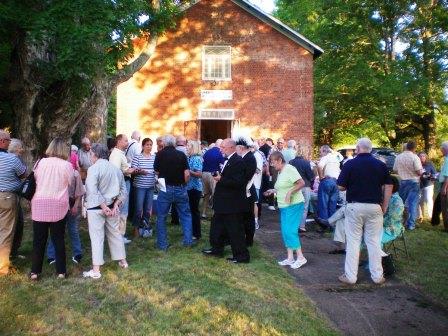