On 25 August 1944, the Nazi garrison that had occupied the French capital since 1940 surrendered to the French Army of the Interior which had been reinforced by the French Army of Liberation and the Third American Army. But a month before that historic day, the Oblates of Mary Immaculate were in mourning because of the execution of five of their confreres at the hands of a brutal Nazi officer, Wilhelm Korf, a well-known torturer. Seventy years later, we remember the sacrifice of Brothers Jean CUNY, Lucien PERRIER, Joachim NIO and Fathers Albert PIAT and Christian GILBERT, all of whom were executed at La Brosse-Montceaux on 24 July 1944. 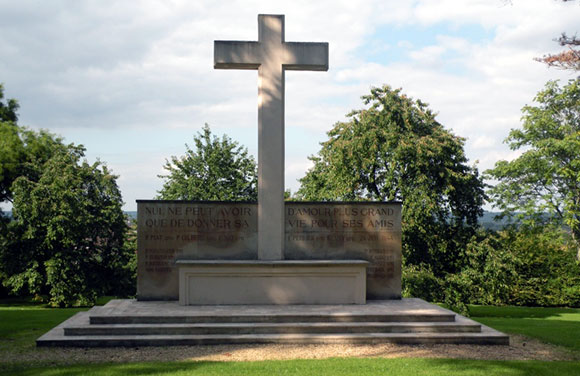 Since 1934, the chateau of La Brosse-Montceaux had served as a scholasticate of the Oblates of Mary Immaculate, a house of formation for future missionaries to the North Pole, South Africa, Laos, the Philippines and Ceylon.

Beginning in 1941, some Oblates from the scholasticate became involved in the Resistance. Resistance newspapers were distributed; false documents were produced at the seminary. In July 1944, weapons and ammunitions were dropped nearby by parachute. The weapons were brought to the scholasticate, hidden and then relocated, with the collaboration of some of the Oblates. Only a few of the religious, including Father Pierre LETOURNEUR, the bursar, and Father Henri DU HALGOUET had contacts with networks of the resistance.

On 17 July at 11 o’clock in the morning, some members of the Resistance, along with a very young boy, came to the scholasticate to pick up weapons and take them immediately to Paris. The religious were surprised that this was happening in broad daylight, but they complied and had the weapons removed from their hiding place.

On 22 July, a member of the Resistance, known at La Brosse-Montceaux as the “Fox,” presented himself at the scholasticate. The automobile that took him to Melun was watched by the Feldengendarmerie in the area of Fontainbleau. The “Fox” was arrested with his chauffeur. He had in his pocket a notebook where, in spite of the orders he had received, he had written the names and the pseudonyms of his comrades. The Nazis would know how to make good use of these names.

At dawn on Monday, 24 July, a 5 o’clock, the whole community was gathered in the chapel and had finished their prayers. A truck pulled into the courtyard; then three groups of German soldiers, armed with machine guns, ran onto the property. The religious had to leave the chapel and two by two, as they received the order, line up in front of the portico of the cloister.

Wilhelm Korf, head of the Gestapo at Melun, was looking for weapons parachuted a few days earlier by the allies. After gathering the entire community in a clearing of the park, the Gestapo took five of the confreres to the basement of the chateau. Brothers Jean Cuny, Lucien Perrier, Joachim Nio and Fathers Albert Piat and Christian Gilbert were then tortured. The legs of one were broken, the feet of another were burned with a torch; in the shoeshine room, each was subjected to waterboarding in a hundred liter cooking pot.

In spite of the brutality and the torture, the Oblates did not talk. Finally, they were gunned down in front of the whole community gathered there and the bodies were thrown into a well.

Later, a large Wehrmacht truck came to get the containers and parachutes out of the well. At 4 in the afternoon, two more trucks arrived and the 86 priests and brothers were ordered to pile in. The religious were taken to Fontainebleau. Then they were transferred from Fontainebleau to Compiegne, except for Father Louis, who was considered too old and was left to his fate. The Oblates were shipped to Germany on 25 August, but the train carrying them could not get past Peronne. Settled down in a makeshift camp, on the 31st, they could watch the collapse of the Germans. At three in the afternoon, the Red Cross replaced the Nazi authorities and evacuated the camp. At six in the afternoon of 1 September, the bells rang out the liberation of the city. One after another, the Oblates returned to their scholasticate at La Brosse-Montceaux which they found thoroughly wrecked.

There is also a video on this subject:  In French only, CLICK HERE TO VIEW  “La Brosse-Montceaux 44 – Les Oblats dans la résistance”