The International St. Eugene de Mazenod Center in Aix is committed to promoting the Oblate charism and Oblate spirituality. The Aix community makes every effort to live in the spirit and charism of St. Eugene de Mazenod, including his predilection for the most abandoned. In other words, they live their mission with love and passion offering their dynamism and selflessly sharing their expertise. 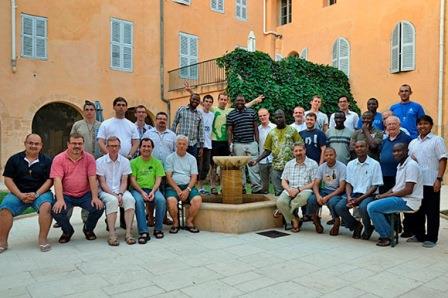 Beginning on 5 August, twenty-two young Oblates took part in a session in preparation for perpetual vows. They represented 14 countries. One could say, the whole world was represented in Aix! There were 9 Oblates from the International Scholasticate in Rome; two from the scholasticate in Vermicino, Italy; eight from Poland; and one each from China, Germany and Canada. Two of them are their second year of studies for the licentiate (moral theology and canon law). The rest are approaching the end of the first cycle of theological studies. Each large group of scholastics was accompanied by a formator, also reflecting the international dimension of our congregation: Frs. Edward DAGAVOUNANSOU (Cameroon), Gennaro ROSATO (Italy), Sébastien BÜNING (Germany) and Piotr PIASECKI (Poland).

Despite the fatigue of the road, these young Oblate scholastics arrived filled with enthusiasm, energy and joy. They arrived to prepare for perpetual oblation by drinking from the fountain of the charism of the Founder. In the words of St. Eugene, they came “to set their lukewarm hearts on fire.” They came to the place it all began to be animated by the same spirit, which calls us to bring Jesus to the ends of the earth.

Filled with the joyful awareness of being at Aix, the source of our Oblate charism, their excitement was contagious. Another exciting dimension of this extraordinary meeting was the intercultural and international scope of the group, experienced by some for the very first time. This meeting was a remarkable opportunity for them to experience and be enriched by the intercultural richness of our Oblate family. This was perhaps the last meeting for some as scholastics; therefore each young Oblate, in his own way, contributed to creating fraternity and conviviality with one another. (Jean-Dieulhomme DUVERSEAU)