Scholastic Brother Dawid KARCHUT, from Assumption Province in Canada, recently completed his third year of theology at the Oblate scholasticate in San Antonio, Texas. During the summer, he had the opportunity to minister for a month with the Oblates who are responsible for Services Jeunes (Youth Service) at Our Lady’s shrine in Lourdes. He wrote about it for his province’s newsletter.

Fr. Wojciech KOWALEWSKI is responsible for youth ministry at the most popular Marian shrine in Europe. Together with Fr. Roberto VILLA, two lay assistants and groups of volunteers that come to work at the shrine for two-week sessions, Fr. Wojciech serves the youth that come to Lourdes.

Our Lady of Lourdes Shrine consists of the famous grotto where Our Lady appeared to St. Bernadette, as well as several chapels and basilicas built to accommodate the millions of faithful who make a pilgrimage to this holy site.

The Service Jeunes headed by Fr. Wojciech is an integral arm of the life of the Lourdes shrine. In our work with the youth who come to Lourdes, among the first things offered is a two-hour pilgrimage along the path of the life of St. Bernadette. This is a powerful experience for many young people. As they realize that Our Lady chose to appear to this young, ignorant, and poor girl, the fact that God may desire to have a relationship with them begins to become real in their hearts. 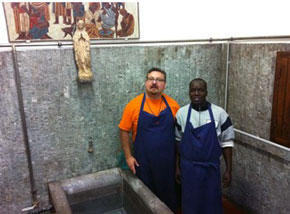 The level of maturity, hope and faith displayed by the predominantly French youth to whom the Service Jeunes ministers is impressive by any standards. In addition to providing tours centered on the life of St. Bernadette and through the Shrine and Grotto, the Service Jeunes provides catechesis of the signs and messages at Lourdes. It also organizes two prayer events at the Grotto. The two international Masses at the Pope St. Pius X Basilica, named in honor of his effort to promote frequent participation at the table of our Lord by all of the Christian faithful, are in part animated by the Service Jeunes.

During my stay of six weeks, it was my privilege and pleasure to participate in each of these activities on many occasions. Apart from the daily encounters with youth from around the world, the most profound experience I had while working here at Lourdes was assisting at the miraculous pools at Lourdes. One particular moment stands out for me: when two older gentlemen found out that they were just assisted by three Oblates who were volunteering at the same pool, they offered us their episcopal blessings in thanksgiving for our quiet, behind the scenes, yet important work. (News & Views, Assumption Province August-September 2104)