The phrase “living together” is misleading in many ways. But in a culture that goes so far as to label the crushing of a baby’s skull as a “medical procedure,” the phrase sounds neutral or even beneficial. Unfortunately, as with most language in our culture, the phrase is disingenuous. It is deliberately meant to conceal some spiritually devastating practice.

“Life” not only comes from God, it unfolds according to the order of his will. This is not an imposition on us, but rather the optimum way for things to unfold. Belonging to God’s community, though Baptism, people are not isolated independent operators – as if they ever could be. Everyone participates in a spiritual and temporal community where men and women uncover the teleology of their lives. The culture cannot help us very much with this because of all of the false ways of thinking that it contains.

In natural law and divine revelation, men and women are infinite spirits expressing themselves in and through their bodies. The world of the spirit is involved in everything because everything originates there – our longings, our loves, our fears, our ignorance. Our spirits are marked by what we do, even when we would like things such as sexual intercourse to be merely physical.

Now we need some spiritual psychology, something that has been known for over 2000 years – ignored but known. In the Book of Isaiah, God says: “Gross is the heart of this people, they will hardly hear with their ears, they have closed their eyes, lest they see with their eyes and hear with their ears and understand with their heart and be converted, and I heal them.”(6:10)

God transcends us, and so can make valid judgments about what we do. He is describing the way that we are. We fool ourselves all too easily. We oppose God’s efforts because we think that we know better and because we want to sin.

Living together is one occasion for this to happen. Strangely enough people don’t set out wanting to be drug addicts, for example, but they make all the right moves for this to happen and the people around them let them. Similarly, people don’t start out wanting to be gross and closed off from God but in living together they make all of the right moves for this happen. 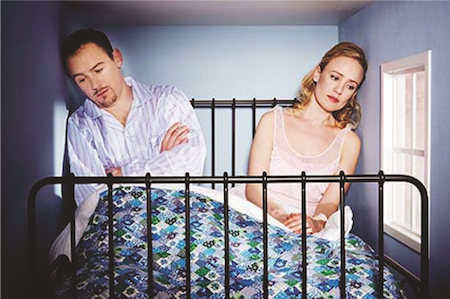 Our rationalizations don’t mean a thing, e.g., living together is cheaper; we are mature enough; we don’t want to get married; we love each other. Just to answer one rationalization, love is working for the good of the other person. That person’s good is not served by my being their occasion of sin. Each rationalization denies the nature that we have been given and the goals for which we have been given it. These are what give living its meaningfulness and fullness.

Now the bit about living “together”: We live in union with God, with each other, and within ourselves (the integrity of the mature psyche). But true togetherness involves moving from the selfish erratic life of adolescence to being a grown-up who can work for the good of another person day in and day out.

Besides our union with God, union with one other person for life, totally committed to another’s good means that: “By matrimony, therefore, the souls of the contracting parties are joined and knit together more directly and more intimately than are their bodies, and that not by any passing affection of sense or spirit, but by a deliberate and firm act of the will; and from this union of souls by God’s decree, a sacred and inviolable bond arises.” (Pius XI)

Settling for a very diminished attachment – impermanent, lacking spiritual depth, and lacking genuine love – is a sorry instance of trying to simulate something that God has already made and blessed, namely Marriage. Living together may seem like the answer to what has become a chaotic world of “married” couples who fail. But one does not choose a mediocre form of life because some married couples make Marriage itself appear mediocre.

There is a kind of vanity is saying: “My parents failed at Marriage so therefore I am not going to get married.” The hurt – and there are mountains of hurt – should be dealt with long before one seeks a permanent loving relationship. Owning up to one’s present circumstances and dealing with them will be a healing maturing experience in itself.

The vanity lies in trying to manage human nature and using one’s own precious life as the laboratory to see whether an experiment will work – or not. Human nature requires dealing with one’s pain until one has come to terms with the past and only then is a person free to contemplate following God’s way of unfolding human nature in Marriage.

Fr. Bevil Bramwell, OMI PhD is the former Undergraduate Dean at Catholic Distance University. His books are: Laity: Beautiful, Good and True; The World of the Sacraments; and, most recently, Catholics Read the Scriptures: Commentary on Benedict XVI’s Verbum Domini.
© 2014 The Catholic Thing. All rights reserved. For reprint rights, write to: info@frinstitute.org
Tweet