It was one of the tenderest moments he had ever witnessed.

Archbishop Roger Schwietz, O.M.I. of the Diocese of Anchorage, Alaska was celebrating the 20th anniversary of a small parish in rural Siberia.  During a special service he presented a cross to a man named Andre.

Andre took the cross, cupped it in his hands, and kissed the image of the Crucified Jesus.  It was a powerful moment for the archbishop, because Andre knows all too well about suffering.  He is one of the last survivors of the Siberian labor camps from the days of the former Soviet Union.

Archbishop Schweitz met Andre while presiding at the 20th anniversary celebration for one of the most unusual parishes in the world.  The Church of the Nativity of Jesus is located in the town of Magadan, in the easternmost

At one time Magadan was Russia’s Auschwitz.  It was the administrative center of Stalin’s death camps where an estimated two million people perished from exposure, starvation and execution.  Many were imprisoned for their religious beliefs or ethnicity.

The parish is a mission of the Archdiocese of Anchorage, making Archbishop Schweitz one of only a handful of Catholic bishops whose diocese is in two countries on two continents.

“My trip there was not only an eventful one, it was also long,” said Archbishop Schweitz.  “Having to travel east from Anchorage, through Moscow because of airline schedules, I experienced parts of Russia I had never seen before.  Everywhere we went the people were very interested in hearing about the life of the Church in the United States and especially in Alaska.  They were grateful for the positive relationship we have in Alaska with our Russian Orthodox brothers and sisters.”

Archbishop Schweitz said the most memorable moment of his visit to Magadan was when he gathered with some of the few remaining survivors of the gulags.  He was amazed at how much these people had suffered, and how they had been able to recover their lives because of the strong faith.

Archbishop Schweitz met a woman named Olga, who was beaten and tortured during her 11-year ordeal in the labor camps.  Her “crime” was that she was suspected of having contact with nationalists, which she never did.  Olga was only 18 years old when she was sent to Magadan. “They employed the most frightening tortures and battery,” said Olga. “When I was returned (to my cell), I would be half-dead, black, beaten up like a piece of meat.”

Archbishop Schweitz also met Anastasia, who was arrested by the KGB on June 1, 1947 in Ukraine while attending Mass.  Dozens of people, including most of Anastasia’s family, were arrested that day as the KGB cracked down on religious expression.  Anastasia spent the next seven years working in the camps.

“What helped me to survive those seven years in prison?” Anastasia said. “Probably, like for all, it was God’s will, His strength and the Holy Spirit. Whatever I did, and wherever I went, I constantly prayed.” Andre, Olga and Anastasia each received a cross from Archbishop Schweitz to represent their suffering and triumph.  Many of the survivors cried when they received their crosses.

Father Michael Shields, who has ministered in Magadan for more than 20 years, said local residents were honored that Archbishop Schweitz would travel all the way from Anchorage to celebrate Mass with them. “We celebrated hope, life and a strong parish, and we were honored by the presence of the archbishop,” said Fr. Shields.  “His simple presence testified that others know and care about our

parish, even though we are far away.”

In 1990 Archbishop Francis Hurley, Archbishop Schweitz’s predecessor in Anchorage, was traveling in Siberia when he came to Magadan.  The few Catholics in the city, many of whom were survivors of the gulags, begged him to send a priest.  Archbishop Hurley convinced the Russian government to allow a Catholic mission in Magadan under the care of the Archdiocese of Anchorage.

While the parish is small in size, with just a few hundred parishioners, it has had a significant impact on the community.  An active pro-life ministry helps women successfully deal with unplanned 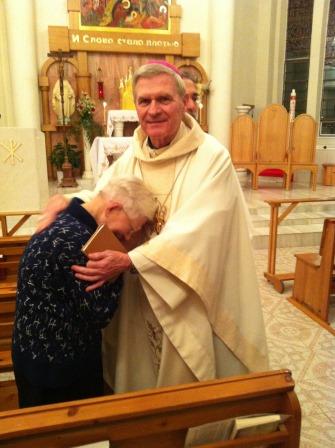 Although statistics are hard to come by, Fr. Michael believes there are more abortions in Magadan than births because of the economic difficulties many expectant parents must endure.  In response to this crisis the parish created Nativity Inn, a sanctuary for expectant mothers who do not have the financial resources to continue their pregnancy without the help of the Church.

During his visit to Magadan Archbishop Schweitz met a woman who is known as the “wisdom figure” of the parish.  Her name is Bratislava, and she was sent to the labor camps because she refused to relinquish her Catholic faith. Bratislava explained to Archbishop Schweitz that she prayed the rosary every day while in the camps.  She made the rosary out of sawdust and pieces of bread she set aside from her meager daily rations.  Today Bratislava comes every day to the Church of the Nativity of Jesus to pray the rosary.

When Bratislava was introduced to Archbishop Schweitz, she gave him a big hug and wept.  For someone who had practiced her faith in secret for decades, the opportunity to meet a member of the Church hierarchy overwhelmed her.

Archbishop Schweitz explained to the local parishioners that as a Missionary Oblate he takes an additional vow at ordination – the vow of perseverance.  In Bratislava and the other survivors of the labor camps he discovered the ultimate in perseverance. “Bratislava is a beautiful lady of love who I was blessed to be able to greet and hold as she wept,” said Archbishop Schweitz.  “Now in her 80s, she has survived to tell the Good News, by her very own life, that love is stronger than death.”

To learn more about the Magadan Mission, visit Fr. Michael’s website at www.magadancatholic.org.