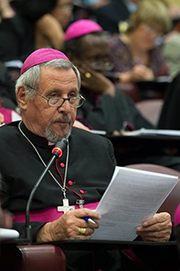 Among the many Synod Fathers from afar, there is Bishop Jean-Claude BOUCHARD, Bishop of Pala in Chad for thirty-seven years. Originally from Canada, he has lived in Chad for 46 years … so he knows the problems of the West, but also those of Africa, since he still retains many ties with his country of origin and with Europe. Bishop Bouchard was present at the first Synod on the Family in 1980; after 34 years, he returns to the microphone of Xavier Sartre, speaking of the changes experienced by this assembly of bishops, and the lively debates among the Synod Fathers during the first week of the 2014 Synod.

We get the sense that the subjects have greatly developed since 1980. Things have become more urgent and problems have increased for many reasons: socio-economic, political, religious, etc. It is true that there are far fewer religious practices than before. There are also far fewer priests. The Church has greatly evolved as a society. The problem of the family, of marriage: that is something that affects everyone, not just people in the Church. It is universal. This applies to all countries in the world and is now evident in the Synod. So for 34 years, since the Synod of 1980, I would say that things have become much more critical, much more urgent. People are also waiting for something and it’s better prepared. There was a working instrument that was published and many people responded, even the laity. The Pope gave us complete freedom of speech, so that the Synod is much more hectic, edgy and much less formal than that of 1980.

And in your opinion, is that a good thing?

It’s a very good thing. I’ve always been for openness. Besides, if you look at Jesus in the Gospel, what is striking about him is his freedom and openness. And I think one feels that, and we must also recognize the influence of Pope Francis. He is very close to the people and he constantly insists on being close to people, to meet people’s needs. One of the difficulties we now feel in the Synod is that there are people who are very committed to doctrine and others who are more committed to the pastoral approach to people. So how do we put together the doctrinal and the pastoral? This is a problem. I manage to solve this problem by looking at Jesus in the Gospel. You cannot accuse Jesus of not having correct doctrine but he gave priority to people and that is fundamental. So I think we find in Jesus this link between loyalty to his mission and at the same time, openness to people. It’s beautiful. It can help us to come together, to form some consensus, because now we have to compose a document that should have the consent of a large part of the assembly in order to prepare the Synod next year. On the other hand, during past Synods, things were proposed to the Pope and he himself wrote a document.

The mid-synod report which was presented Monday by Cardinal Erdö sparked quite a commotion. It was felt that there was indeed tension between those who are more committed to doctrine and those who may be more attached to ministry. You, as a Bishop who has dual cultures, since you are Canadian and therefore western, but having spent most of your life in Africa, can you also understand the tension between these two approaches?

I see it very well. It’s true that I am still American or Canadian or European. I have great relationships with everyone but I am in charge of a Church in Africa and it is the problems of Africa that concern me first. I simply draw attention to a paragraph that talked about Christian marriage and spoke of cohabitation. So I asked, “And a marriage of custom? A traditional African marriage? Where is it found there?” It is reduced to cohabitation or it no longer exists. Then we will lament that there is a dichotomy between traditional marriage and Christian marriage, the sacrament of marriage. But if marriage of custom is removed, it truly removes the dichotomy but it also removes the traditional marriage that people enter into. And furthermore, traditional marriage is required in order to enter into a Church marriage. So my heart reacts immediately on the side of Africa. It is true that I am a bishop in Africa; I am not African, but that does not matter.

In the mid-synod report, it has been felt that the topics discussed and those that have grabbed the most attention are very Europe-centered themes. Yes they are common all around the world but they are particularly felt in Europe and North America. Do you think that from this point of view then, the text is a bit out of step with expectations and problems in other parts of the world?

That is almost inevitable in the sense that documents that come from the Church are often Western-inspired. That’s true! We already have the good fortune of having a Pope who is not European, who is South American. And the Church in Latin America is quite different. That is an image of the Church. Sometimes I find that African bishops do not dare to say some things. But we have seen this morning that several spoke up on the same subject that I just mentioned. They said “No, traditional marriage is not reduced to cohabitation. If there is a traditional marriage, we must accompany this marriage. What value will we give it?” This is a question that must be asked and there is also this problem: “Can we can give the sacraments, recognizing traditional marriages properly done as already valid marriages, even if not sacramental?” It is a problem because in canon law, it says that for a Christian, there is no other marriage than the sacrament. Does it have to stop there? For the people, theirs is a real marriage. It should be recognized as legitimate and therefore able to provide access to the sacrament. But I still say that people are expecting something. We should arrive at the end of this Synod with some openness that will show show the people of God that the Church cares about them, that we see the problems and we will try together to find solutions.