On 15 November 2014, Pope Francis has named Fr. Wilhelm (Guillermo) STECKLING, Missionary Oblate of Mary Immaculate, as Bishop of the Diocese of Ciudad del Este. The former Superior General of the Missionary Oblates is currently serving as the superior of the Beato José Gerard Scholasticate in Asunción, Paraguay.

The newly named bishop will have the difficult mission of bringing peace and harmony to a diocese that has recently suffered a good deal of turmoil. In September 2014, the Holy See issued the following statement: “Following a careful examination of the conclusions drawn following the apostolic visits carried out by the Congregation for Bishops and the Congregation for the Clergy to the bishop, the diocese and the seminarians of Ciudad del Este, the Holy Father has decided to substitute Bishop Rogelio Livieres Plano and has appointed Bishop Ricardo Jorge Valenzuela Rios of Villarrica del Espiritu Santo as apostolic administrator of the diocese of Ciudad del Este. This was a difficult decision on the part of the Holy See, taken for serious pastoral reasons and for the greater good of the unity of the Church in Ciudad del Este and the episcopal communion in Paraguay. The Holy Father, in the exercise of his ministry as the ‘perpetual and visible foundation of the unity of both the bishops and the multitude of the faithful’, asked the clergy and all the People of God of Ciudad del Este to accept the Holy See’s decision with a spirit of obedience and docility and without prejudice, guided by faith. On the other hand, the Church in Paraguay, guided by her pastors, is invited to embark on a serious process of reconciliation in order to overcome any form of sectarianism or discord, so as not to harm the countenance of the one Church, ‘born of the blood of His Son’ and so that Christ’s flock may not be deprived of the joy of the Gospel”. 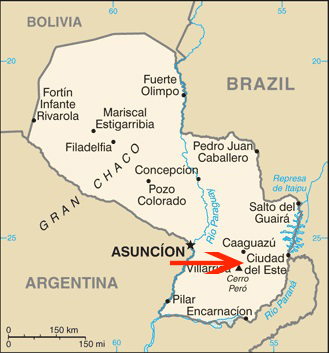 Now that “serious process of reconciliation” will be in the hands of a man who had the universal respect and love of his brother Oblates during the 12 years he served as Superior General (1998-2010).

Fr Steckling was born on 23 April 1947 at Verl in North Rhine-Westphalia, in the diocese of Paderborn, Germany. He made first vows as an Oblate in 1967and his perpetual vows in 1973. He was ordained a priest in his home parish of Spexard, near Gütersloh, in 1974. The same year, he received his first obedience for the then Vice Province of Pilcomayo and left for Paraguay.

His early ministry was among the rural Guaranis in the parish of Independencia, diocese of Villarica. He later worked in Asunción as a formator, primarily at the pre-novitiate. In 1986, and again in 1989, he was elected Provincial of the Vice Province of Pilcomayo. He had just finished his term of office and returned to his work at the pre-novitiate when the 1992 General Chapter elected him second Assistant General. During those six years as Assistant he was responsible for the formation portfolio.

He was elected the twelfth Superior General of the Congregation in 1998, succeeding Archbishop Marcello ZAGO, who had become the Secretary of the Congregation for the Evangelization of Peoples. The 34th General Chapter (2004) reelected Fr. Guillermo for a second term as Superior General. Following his 18 year sojourn in Rome, he was happy to return to his missionary life in Paraguay.