Written by Sean Salai, SJ and Originally Published in the September 3, 2014 Edition of  AMERICA MAGAZINE 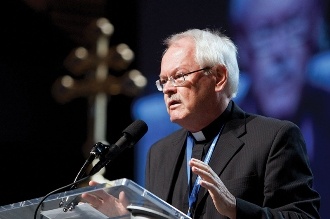 Father Ronald Rolheiser, O.M.I., is an Oblate priest, theologian and popular spirituality writer. He is president of the Oblate School of Theology in San Antonio, Texas. He received his doctorate in systematic theology at the University of Louvain and is a member of the Catholic Theological Society of America, the Canadian Theological Society, and the Religious Studies Association of Alberta. Father Rolheiser previously taught at Newman Theological College in Edmonton, Alberta, and he writes a column in the Catholic Herald that is featured in approximately 60 newspapers in five countries.

Father Rolheiser’s latest book,Sacred Fire: A Vision for a Deeper Human and Christian Maturity, was published by Image Doubleday in March 2014. On Aug. 13, I interviewed Father Rolheiser by email about his writing and work.

Q: Your follow-up book to The Holy Longing is called “Sacred Fire.” What does that title mean to you?

A: Picking a title for a book is something I normally leave to the publisher, who has a better expertise on this kind of thing. When I write a book, I always have a very clear intent in mind and the intent of this book was to try to articulate some challenges for a deeper human and Christian maturity. That makes for a subtitle, but you always search for a more poetic title that can serve as hermeneutical key for the book. Sacred Fire was suggested to me by Robert Ellsberg, the Publisher at Orbis Books who’s a friend of mine. The intent was to link it in some way to The Holy Longing, since this is really like Volume Two of Holy Longing. We initially toyed with the idea of calling it Holy Fire, but, that would, I believe, have led to some unfortunate word associations – “holy fire, holy smoke!” Sacred Fire serves the book well as a poetic title.