By Deon Roberts, Originally Published in the Charlotte Observer 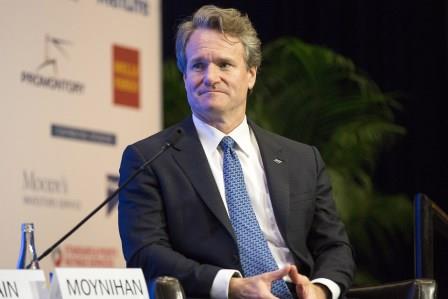 A faith-based group has become the latest institutional shareholder to push Bank of America to reverse its decision to give the chairman’s title to CEO Brian Moynihan.

In a filing with the Charlotte bank, New Jersey-based Sisters of Charity of St. Elizabeth asks Bank of America’s board to require its chairman to be independent. As CEO, Moynihan is not considered to be an independent board member.

The request comes ahead of Thursday’s deadline to submit stockholder proposals for a potential vote at Bank of America’s next annual meeting, to be held in the spring.

It’s not clear whether the bank will bring the issue before shareholders. Bank of America spokesman Lawrence Grayson declined to comment Monday.

The Sisters of Charity request is the most recent example of opposition to the bank’s move last month to give the chairman’s title to Moynihan. By taking that step, Bank of America rolled back a bylaw change approved by shareholders in 2009 to separate the titles. That vote led the lender to strip the chairman’s title from former CEO Ken Lewis.

Earlier this month, the California State Teachers’ Retirement System and New York City Comptroller Scott Stringer sent a letter to Bank of America asking for a shareholder vote on the bylaw change. Ricardo Duran, spokesman for the California retirement system, said Monday that it had not yet received a reply to that request.

In requesting that Bank of America separate the roles, the Sisters of Charity says it is “alarmed” by the “continuing flow of penalties and settlements” involving the bank since the 2008 financial crisis.

The group cites a settlement announced earlier this month in which Bank of America agreed to a $250 million civil penalty to resolve a U.S. regulator’s claims of deficiencies in the bank’s oversight of its foreign-exchange business.

In light of such fines and settlements, “we believe that management needs greater oversight by separating the roles of CEO and Chair of the Board,” the Sisters of Charity say. In addition, there is a potential conflict of interest “for a CEO to be her/his own overseer while managing the business,” the group says.

Among the biggest U.S. banks, only Citigroup has separate CEO and chairman posts. But that has not prevented Bank of America from drawing criticism over the move.

Stringer’s office has said the decision weakened the independence of Bank of America’s board. Seamus Finn, chairman of the New York-based Interfaith Center on Corporate Responsibility, said the bank’s ongoing fines and settlements show that it needs “to take a serious look at the culture of the institution.” He said it would be better if the roles were separated.

Sisters of Charity is a member of the center, a coalition of faith-based institutions and other large holders of various public company shares. Finn said Monday that he has spoken to other coalition members who plan to file similar proposals with Bank of America.

Nancy Bush, an independent bank analyst, predicts Bank of America will bring the issue to shareholders for a vote, because of the criticism it is generating.

“I think they’re going to have a hard time not putting it on the ballot,” she said.