We measure all dimensions of our missionary commitment according to how we share the daily life of the people of the Masomeloka region. We encounter various faces of poverty: it can be material, intellectual, spiritual and moral, aggravated by various cultural, racial and even religious clashes. 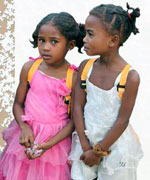 This is a fertile region that exports many products by canoe on the Pangalanes canal. Indeed, any other way of communication and travel is almost impossible due to bad road conditions.

Why are these people poor? What solutions can the Church can bring to these problems? How can she realize development projects?

The economic realities of Masomeloka present a people living from agriculture and livestock, using simple and traditional methods. It is the same for fishing at sea and in the Pangalanes canal. Their resources are not sufficient to support their families. They have no way to store up for the future. Every day, they look for something to eat; living from day to day, they remain constantly in a situation of material poverty.

From the social point of view, the people of this region are poor because 97% are farmers and fishermen. Population growth is increasing but the living space and the land to cultivate do not increase, so serious conflicts arise between families and neighbors. Some 55% of the cases handled in court at Mahanoro concern inheritance problems of the inhabitants of Masomeloka. This damages society and leads to harmful consequences such as jealousy, bitterness and revenge by spreading insecurity and fear. To this is also added a big drug problem for young people, without overlooking the exploitation of the weak by the rich. They seek to take advantage by making illiterate people work hard for a pittance.

From the intellectual point of view: young people who have had the chance to study choose to leave to find work outside their region; they do not want to go back because of this mentality 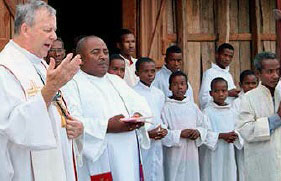 which they describe as “barbaric or backwards.” Over 85% of the population cannot read or write. It even happens that in some villages in the countryside, we could not find a single person to lead prayers or hold the office of catechist.

Given all these problems, the Christians of Masomeloka do not want to become discouraged. They asked the Catholic mission to seek solutions with them because they want to save their generation and their future. Together we have worked on a project for the creation and opening of a Catholic school in the OMI parish. To move toward the realization of this project, we formed a group representing all the Christians of our Catholic mission. We held meetings every first Friday of the month, to arrive at a decision together; we decided to build a simple building 18m long and 8m wide, using local materials.

We shared the responsibilities for making a budget and finding the people who could help us carry out this project. Parishioners are finally seeing the realization of a project they awaited for 10 years. The birth of this work is rooted in the thrust of the OMI triennium, inviting Oblate missionaries to conversion, to be attentive to a new spirit and a new mission. The opening of the Catholic school is very important for the Church and the good of the people of Masomeloka. It is a gateway to the knowledge of the faith, of wisdom and knowing how to live. (Fr. François de Sales RATOVONIRINA in Echo OMI Madagascar, November 2014)