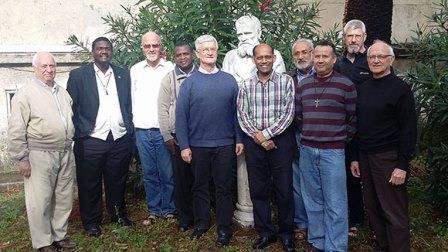 During the five days together, the committee looked at various issues pertaining to JPIC in the places were Oblates are present and beyond. On the first day, participants were all welcomed and the new director of the General Service read a letter from the Superior General. In his letter to the committee, Fr. General said, “Study thoroughly how you can animate our Local Oblate Units in this essential ministry of our Oblate mission with the poor. How can this important ministry be coordinated in the different Oblate Regions?” 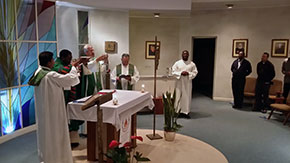 The letter by the Superior General set a tone for the deliberations of the session. Reports from the various regions and also from the UN were shared and Fr. Felix gave feedback as an observer and special listener to the presentations. Fr. Camille also shared and reflected with the group his past 6 years as director.

The second day was spent discussing the question of “How Oblate Units and Regions link with the UNO and the Washington, DC office; how they interact with NGOs, governments and others Congregations in their Regions.” Fr. Daniel CORIJN, then gave the background to the JPIC Vade Mecum, a document which the committee is reviewing and adapting.

The third day began with a talk by the Vicar General, Fr. Paolo ARCHIATI, who thanked the committee for their dedication and commitment. He challenged the committee to do more in the area of animation of Units and local communities regarding JPIC. Later in the day, the committee looked at the preparation for the Third Year of the Oblate 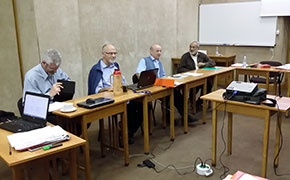 The next day, the committee focused on the Superior General’s letter and his recommendations to the committee and later the group looked at the OMI JPIC priorities and statutes. The committee also outlined their strategy for the coming year and beyond, by considering capacity building workshops; improvement of the communication system and dissemination of information; integration of JPIC in formation of Oblates and the laity; more involvement of Oblate Brothers in JPIC; and developing tools for animation. The last day was spent on reviewing and looking at the way forward to better animate the Regions, Units and local communities. (Kennedy Katongo)