On 30 November 2014, Msgr. Lucio ALFERT, Bishop of the Apostolic Vicariate of Pilcomayo, celebrated Mass in the Basilica of Caacupé, for the third day of a novena in preparation for the feast of the Virgin, patron saint of Paraguay. During his homily, the Bishop spoke forcefully of the situation of indigenous peoples, who are discriminated against and excluded from their land, while in the past even the capital and the metropolitan area belonged to them. He then expressed his deep regret because the natives who arrive in the capital often fall into addiction and are sexually exploited. 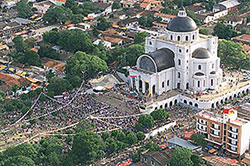 Referring to the role of the governors, Bishop Alfert said: “Sometimes I have the impression that few politicians and officials love their motherland and the people”. He recalled that the authorities were chosen to serve the people: “The charism of a true politician is to be a servant of the people”. God distributed gifts and capabilities to all, even to politicians, but “they do not use them to serve the people, but to take advantage and use them”. In the end, referring to the rampant corruption, he asked: “When will we see a politician saint?”

The devotion to Our Lady of Caacupé dates back to 1600, when an indigenous Guarani engraved an image of the Madonna in wood. Popular devotion over the years has increased the fame of the shrine dedicated to Our Lady of Caacupé, which has become the busiest in the nation. The main feast, on 8 December, is preceded by a novena during which groups of pilgrims from all over the country flock to the Shrine with their Bishops. (Fides Agency)