By Alan Oberst and originally published by Artvoice in Buffalo, NY (Used with permission) 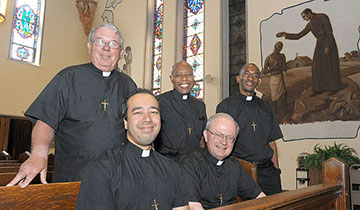 Believe it or not, it’s been just over a year since the first Buffalo Mass Mob, initiated by Chris Byrd of Broadway-Fillmore Alive, which took its inspiration, in part, from Chris Smith’s Buffalo Cash Mob for small business. As one of the four Buffalo Mass Mob organizers (the other two being Greg Witul and Danielle Huber), I can attest that it’s been kind of a wild ride. Going viral, the Mass Mob movement has garnered national and international attention, including October features on NPR and on the front page of theNew York Times, inspiring people in other cities to organize their own. Over a thousand people attended September’s Buffalo Mass Mob at Assumption Church in Black Rock. Over the last year, the effort has also raised over $30,000 for the churches it has visited. Mass Mobs in Detroit and Hamtramck have drawn as many as two thousand participants.

Along the way, the Mass Mob has found itself part of a lively, urgent discussion in the Catholic Church (and in most denominations) about the relevance and vitality of churches in 21st Century America. In modern, highly secularized America, what is the mission of the church? Not only at the grass roots: the Pope, Cardinals, and Bishops have discussed the same at this year’s oft-contentious Vatican synod.

One answer, from the Oblates of Mary Immaculate (OMI), the religious order that founded Holy Angels Church in the 1850s (almost simultaneously with the “Grey Nuns” founding of neighboring D’Youville College) as a mission to Buffalo’s newly arrived Catholics, is to return to their roots by establishing actual, literal, missions. CLICK HERE to read the rest of the story