Fr. Nicholas HARDING recounts some of the day-to-day events in a poor mission on the Mexican-United States border. 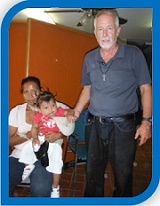 In one day, recently this is what happened to me as pastor of our San Eugenio parish, in La Morita B.C. I had a funeral for a two year old boy who died in a home accident. His mother, a single parent, left her three boys alone at home and they climbed on the stove which toppled over. Here there is little or no day care. Normally in Mexico the extended family is strong, but apart from the general crisis of the family, in the border area, many come from the interior of Mexico and are disconnected from their traditional way of life.

On the same day, I also had a funeral for a 35 year old woman who died of leukemia (could it be the great number of young persons with cancer here has to do with pesticides and chemicals from the factories?) One of the other priests had a funeral mass for a 38 year old man whose cause of death was meningitis (the quality of health care, and access to it, is not comparable to what is available right across the border in San Diego, California, where most young people would not die from meningitis). Later in the day, a pregnant thirteen year old girl was presented to me for a blessing. 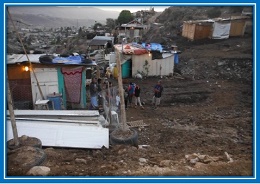 This November we had 38 houses burn down in one colonia. The fire spread rapidly but the firefighters arrived almost an hour after being called. The colonia is on a hill with dirt roads and there are no fire hydrants; the fire trucks have to carry water tanks. Also, last spring, due to the drought, many houses burned. One man was seriously injured when a propane tank blew up. In July, several more shack residences burned down.

We always provide emergency help: food, blankets, clothes, etc. Additionally, we try to get them material to rebuild their homes. Occasionally we are able to mobilize a group from the USA to help reconstruct.

At the other extreme, we received much needed rain in December, but too much at one time! Many houses at the foot of the hills received a river of mud at about 5a.m. Thankfully no one was injured.

If you would like to know more about the work of the Missionary Oblates in La Morita, Mexico, view this 12-minute video which features Fr. Nick and other Oblates.  CLICK HERE TO WATCH