From 17-21 November 2014, the Pontifical Urbaniana University in Rome was a hive of activities as it hosted the 7th World Congress for the Pastoral Care of Migrants. The Congress which is held every five years had as its theme: “Cooperation and Development in the Pastoral Care of Migrants.” The Congress gathered more than 300 participants from around the world and among them was Father Kennedy KATONGO, Director for the OMI JPIC General Service in Rome. 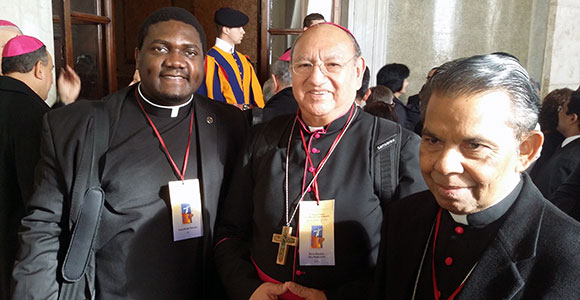 Welcoming the participants was Antonio Maria Cardinal Veglio, President of the Pontifical Council for the Pastoral Care of Migrants and Itinerant people. During the five day meeting, there were informative talks, presentations on the migrant situation in various parts of the world, and round-table debates. 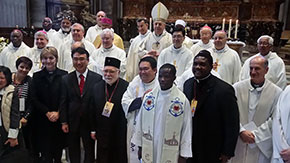 The fifth and final day included an audience with the Pope Francis. During the audience Pope Francis expressed gratitude to all people that are dedicated to the work of helping migrants. The Holy Father continued by saying that “The final Document from your last meeting five years ago affirmed that ‘migration is… an invitation to imagine a different future, which seeks the development of the whole human race; this includes then every human being with his or her spiritual and cultural potential and contribution to a more equitable world marked by global solidarity and by full respect for human dignity and life.’” The Holy Father remarked that, “Today, notwithstanding new developments and the emergence of situations which are at times painful and even tragic, migration is still an aspiration of hope.”

He stated that “pastoral workers play an important role through initiating dialogue, welcoming and assisting with legal issues, mediating with the local population. In the countries of origin, on the other hand, the closeness of pastoral workers to the families and children of migrant parents can lessen the negative repercussions of the parents’ absence.”

As Missionary Oblates of Mary Immaculate, we cannot remain indifferent to the events in our world today. We ask ourselves, where do we fit in and what is our prophetic role in safeguarding the rights of migrants? (Kennedy Katongo)