Missionary Oblates in the U.S. support the movement and schedule activities during this special week. Fr. Harry Winter, OMI (www.harrywinter.org) reported on one such event this year in the Native American Mission territory of Waubun, MN. This item originally appears in the January 21, 2015 edition of the Northern District Community Newsletter:

“Since Fr. Joe Hitpas arrived in the mission in July 2014, he and Fr. John Cox have been meeting regularly with the Lutheran and UCC pastors in Waubun.  Those meetings are bearing fruit in our first ecumenical prayer service in observance of the Week of Prayer for Christian Unity.  The service was held on January 21st at Circles of Faith UCC Church. Clergy and church members from other area communities also participated in the service.

The majority of children in our school district receive their most nutritious meals at school.  Concerned about their health and welfare when school is not in session, our small clergy association initiated a “back-pack program” in partnership with the schools.  The program is in an early stage, but 50 children identified by school staff as most in need, are benefitting from food placed in their back-packs once a month, which are their meals over the weekends.  We clergy are educating our congregations and others in the community about the need.  It was the focus of the sermon at our Ecumenical service.  We hope to engage more people in this action which “feeds the hungry” and also to expand the program to serve more children.”

Everyone is invited to attend An Evening of Praise, Worship, and Preaching on Friday, January 23 at 7:00 p.m. in Tymen Hall 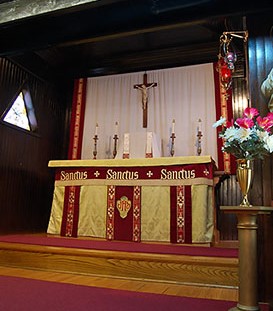 The Church Unity Octave was first observed in January, 1908. Celebrated in the chapel of a small Atonement Franciscan Convent of the Protestant Episcopal Church, on a remote hillside fifty miles from New York City, this
new prayer movement caught the imagination of others beyond the Franciscan Friars and Sisters of the Atonement to become an energetic movement that gradually blossomed into a worldwide observance involving many nations and millions of people.

To fully appreciate this stream that had been fed by some and had converged with others in the historical development of the Week of Prayer for Christian Unity, we will note some aspects of the movement’s early history. Two American Episcopalians, Father Paul James Wattson and Sister Lurana White, co-founders of the Franciscan Friars and Sisters of the Atonement, were totally committed to the reunion of the Anglican Communion with the Roman Catholic Church. As such, they started a prayer movement that explicitly prayed for the return of non-Catholic Christians to the Holy See. Needless to say, such an observance would attract few of our separated brothers and sisters except for a small number of Anglo-Catholics and Roman Catholics themselves. This idea of a period of prayer for Christian unity originated in a conversation of Fr. Wattson with an English clergyman, Rev. Spencer Jones. In 1907 Jones suggested that a day be set aside for prayer for Christian unity. Fr. Paul Wattson agreed with the concept but offered the idea of an octave of prayer between the Feast of St. Peter’s Chair on January 18 and the Feast of the Conversion of St. Paul on January 25.

CLICK HERE to read the rest of this article