Twenty five years ago, the hilly region of Kaliori was a deserted area. Nothing was found there, not even water. But the workers who were building a Marian Shrine were asked to keep on digging. At last, the water came out. They used the water to mix the materials for erecting the grotto. After the building of the Shrine was finished, the spring stopped running. It was considered a miracle, a sign of God’s favour and blessing for the building of the Marian Shrine of Kaliori. 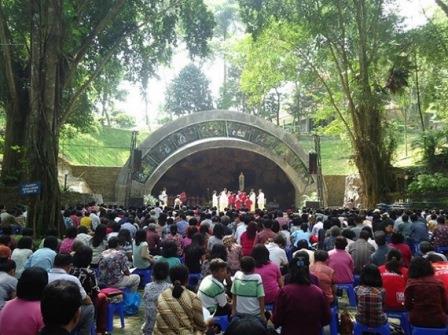 Pilgrims are welcomed at the Marian Shrine of Kaliori, located in Central Java, Indonesia. They can celebrate Eucharist and pray at the spacious grotto; pray the Stations of the Cross; visit the mausoleum of bishops and priests; pray at the rosary garden; make a retreat; or even have a camping experience on the grounds surrounding the Shrine. Pilgrims may also visit the hostel for the elderly, run by some Sisters, the Daughters of Mary and Joseph. 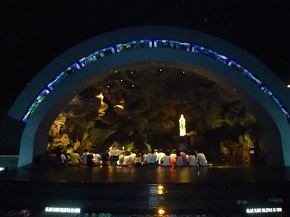 The beginning of the Shrine was the initiative of some local Catholics who wished to have a Marian Shrine especially for the people of Purwokerto Timur Parish. The parish priest, Fr. Patrick McANALLY, accepted the idea as part of the parish planning, but later on, the Shrine became a diocesan project. Thanks to the support of the parishioners as well as of Fr. Patrick and other Oblates, such as Frs. Charles BURROWS and John CASEY, they were able to purchase several hectares of land. On 15 August 1988, a ceremony was held to begin constructing the Shrine. 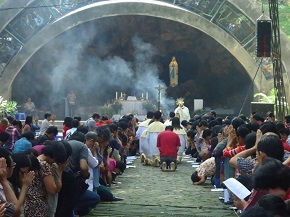 The Shrine was inaugurated on 8 December 1989 by the Bishop of Purwokerto who then entrusted it to the care of the Oblates of the Indonesian Province. Since then, the Oblates faithfully provide spiritual services to the pilgrims and other visitors. The Shrine’s statue of Our Lady was blessed by Saint John Paul II.

Because the Shrine was beginning to show its age, the Shrine team decided to renovate and widen it to accommodate thousands of pilgrims from all over the country. In 2012, a committee for the renovation was formed. They erected a new and larger grotto. The new grotto can accommodate up to 100 persons inside it.

For 25 years, the Shrine has been a place where people come for blessings. The dry and deserted region now has been transformed into a green and tranquil area. Happy to see the change, the Bishop calls the place “The Shrine of Mary the Faith Soother”. The Shrine also provides economic “blessings” for the poor people who sell food and souvenirs there. Indeed, blessings always flow from this place! (Indonesian Triennium Team)