Oblate Partnership members from all over the country gathered at the Oblate Renewal Center in San Antonio, Texas for a “Winter Warm Up” at the 10th Annual De Mazenod Conference January 30 – February 1. Though the outside weather was a bit damp and chilly, the atmosphere in the meeting was downright balmy. Long-time members greeted each other like family and first-timers were welcomed with enthusiasm, a proper setting for the conference theme: Francis and The Joy of the Gospel. 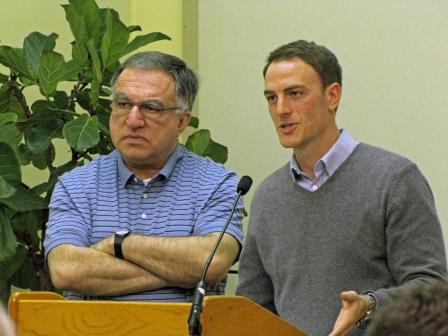 After the opening-night social and dinner, the conferees were welcomed by Partnership Chaplain, Fr. Séamus Finn, OMI, and by President Artie Pingolt who reflected on his search for “Joy” in the Gospel sense and what it means. 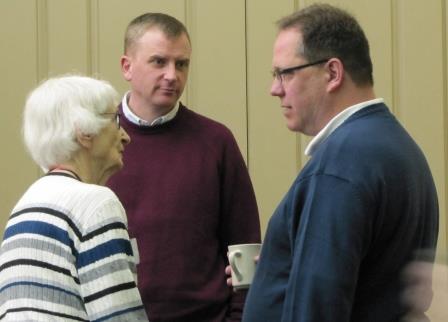 The evening’s “main event” was a presentation and screening of the new documentary by the Canadian TV Network, Salt & Light called, The Francis Effect. Special guests for the screening were Salt & Light’s CEO and executive producer of The Francis Effect, Fr. Tom Rosica, CSB, and the producer / host, Sebastian Gomes. They provided a fascinating “back-stage” glimpse of the making of the documentary and of their interviews for the film which included: the Cardinal Archbishops of Boston and Washington, DC, Sean O’Malley, OFM Cap and Donald Wuerl, respectively, Fr. Federico Lombardi, SJ, Director, Holy See Press Office, broadcast luminaries, Scott Pelley of CBS, ABC’s Diane Sawyer and many more.

Saturday began with breakfast and a celebration of the Eucharist with outgoing Partnership Chaplain, Fr. Tom Singer, OMI. The morning and afternoon sessions provided lots of opportunities for further discussions on what has changed in the first two years of Francis’ Papacy and what changes the future might bring. In addition, Fr. Rosica, who is also the English Language Assistant in the Holy See Press Office, provided more first-hand insights into the transformations going on within the Vatican walls. 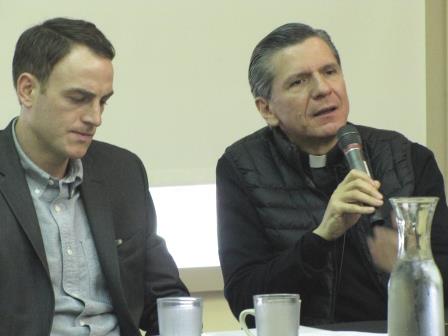 Saturday night brought a “Mexican Fiesta dinner, followed by the screening of another documentary, this one from the Anglo-Irish Oblate Province titled, The Nazarene. This film focused on a single missionary, Fr. Charlie 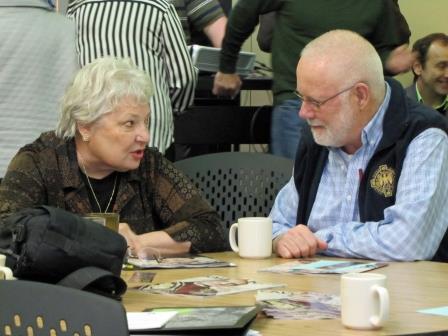 Burrows, OMI, who’s been working in Indonesia for the past 40 years. In order to improve the lives of his people, the entrepreneurial Fr. Charlie has started construction companies to make jobs and build roads, training facilities for individuals wanting maritime careers, and even banks to provide financial services and access to capital for homes and businesses.

Fr. Burrows has done all this while also serving the spiritual needs of a small congregation of Catholics in his part of a country that is 90% Muslim.

On Sunday morning another special guest, the Archbishop of San Antonio, Gustavo Garcia-Siller, M.Sp.S. presided over the Eucharistic celebration, then stayed on to participate in a panel discussion about the recent Synod on the Family. The other panel members included guest-speakers Fr. Tom Rosica and Sebastian Gomes, along with author and president of Oblate School of Theology, Fr. Ron Rolheiser, OMI. Panel members fielded questions on a variety of family-related issues and gave some of their experiences with and expectations of the Francis Papacy. 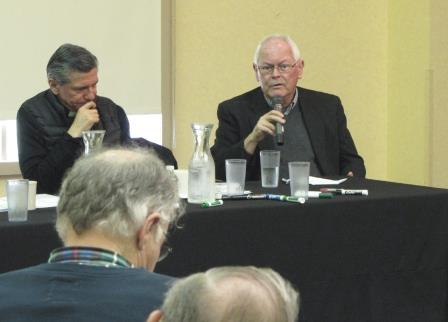 As the partnership members began to head home after lunch, the feeling was one of a family gathering coming to a close. They took home a deepening identification with the Oblate charism and a broader understanding of the spirit of renewal within the Church and how they might participate in The Francis Effect.

The Partnership began in 2004 as an initiative of the US Province of Missionary Oblates to provide a new way to engage with individuals and institutions that support the Oblate charism of evangelizing the world’s poor.

The Partnership promises a collaborative relationship between its members and the Oblates themselves as well as ongoing educational resources for Partners, Oblates and the larger Church, in its annual De Mazenod Conference and other ad hoc events.

Members include not only Oblates themselves but lay men and women and other Catholic religious, including diocesan priests and bishops and women religious. The Partnership includes non-Catholic members as well.