2002, the Siloam center, run by the COMI (Oblate Cooperators of Mary Immaculate), has treated thousands of sick and malnourished persons. The COMI (a Secular Institute founded in Italy by Fr. Gaetano LIUZZO) live the charism of St. Eugene de Mazenod. In their annual New Year message to their friends, they tell of how they celebrated Christmas 2014.

How was Christmas in Kinshasa? We heard the fireworks and the music, but the Christmas we want to tell about is quite different. 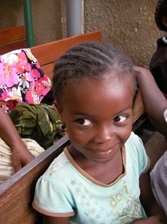 For us, it begins at least a month before, because it requires an organization worthy of a big family composed mainly of children, and gifts for children, you know, must be chosen according to the age, size, etc. It’s also important to understand, as happens in every family (we hope!), how much disposable income there is, so that all may be treated with the same love, and this means also looking for stores where you can save money. So, after a bit of research and excursions, our home was filled with bags of rice, sugar, salt, milk, canned tomatoes, drums of oil, clothes. And then began the preparing of gift packets. Preparing so many bags is nice; you also feel that you are actually doing something and you put so much love into it. Of course, after yet another bag, when between the rice and the sugar, you feel you are becoming prey to the ants (they also have a right to survive!), the excitement decreases a bit, but the meaning of the gift increases. Inevitably, despite all precautions, even a small percentage of the salt ends up on our clothes or on the floor. The advantage is that the salt acts as a counterpoint to the sugar and neutralizes for a while the silent but patient advance of the ants. 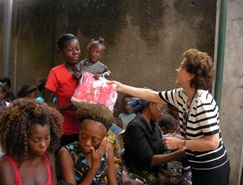 Once the gift packets are finished, we have to load them into the jeep; there’s nothing unusual about that except that those who need to go to Siloam have to sit, not only between but also on top of the packages. It’s funny until the first hole, and since 70% of the street leading into town is filled with holes, you can imagine how one feels at the end of the journey. Traffic is chaotic in the last days leading up to Christmas, but we waited until 24 December to deliver the packages to avoid their being consumed too soon. We accomplished our first task: buying the chickens. Then it was interesting to meet our friends, children and adults, a bit bruised, a bit recovered, but all quite happy. Except for one man, an elderly person with TB, whom we have included in the nutrition program: after taking his package, he asked, “and the beans?”…much to our dismay because we did not have any. We thought we had done enough already; compared to last year, we had increased the amount of food, but instead, we realized there is never enough for those in need. The adults also received a “pagne” – a piece of cloth – for making a shirt or a skirt, while each little girl received a little dress and every little boy, a little suit with shorts and tee shirt.

Returning home, despite the traffic jams and the rather fierce heat that day, we felt tired but also a bit happy: only a bit, because to be truly happy you should not need to distribute food packets for Christmas. Everyone should have enough to eat every day. But for now, that is still a utopia, which moves us to try even harder to do our part, as much as possible, without presuming to solve the great problems of our brothers and sisters. We can only share with them our certainty that Jesus is incarnate today in every creature, and that this is the reason why we stay with them.