In baseball, a triple play is rare.  It occurs when the team in the field can eliminate three opponents in one play, and that team wins the inning.  They may not win the game, but it certainly helps.

He uses the term “economy” to say “NO TO ANY ECONOMY OF EXCLUSION,” followed by three more “NO’S”:  TO THE NEW IDOLATRY OF MONEY, TO A FINANCIAL SYSTEM WHICH RULES RATHER THAN SERVES, and TO THE INEQUALITY WHICH SPAWNS VIOLENCE.2 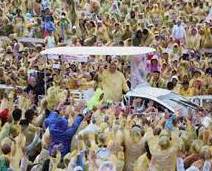 When Gerard O’Connell described Francis’ decision to celebrate an open air Mass  for the half million people on a stormy, wet and windy day at Tacloban Airport, the Philippines on January 17, 2015, O’Connell made it clear that Francis was there to demonstrate personally his rejection of the way many of us do things.  Four million people in the area were homeless since the worst typhoon in history hit their island on Nov. 8, 2013.  Francis came to be with them.  O’Connell’s  presence with the pope, and the description he gives of the Mass includes “[his]words of faith and hope brought many to tears.  Journalists wept too.”3

It is no surprise that Francis is writing a widely anticipated letter on ecology.  In “Joy of the Gospel,” he has linked our ecological crisis to economics.  “Whatever is fragile, like the environment, is defenseless before the interests of a deified market, which becomes the only rule.”4

We may debate whether the warming trend is entirely caused by human activity.  But what is clear is that environmental changes are affecting many people for the worse.  The pope’s experience in the Philippines has certainly affected his determination to bring peoples together to help those afflicted.

The Economist noted when the pope met with the Coptic Orthodox Patriarch, and referred to the martyrdom of the 21 Copts by ISIS, he said:  “The blood of our Christian brothers and sisters is a testimony which cries out to be heard….It makes no difference whether they be Catholics, Orthodox, Copts or Protestants.  They are Christians!  Their blood is one and the same.  Their blood confesses Christ.”  The writer called this “a passionate reaffirmation” of what the pope had said in an interview in Dec. 2013:  “For me, ecumenism is a priority.” 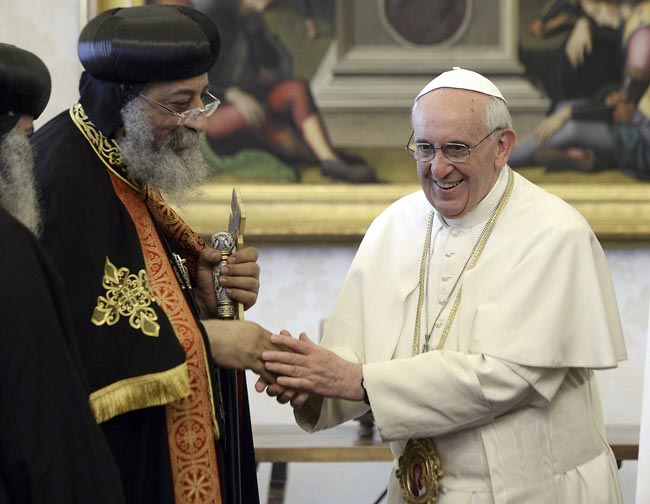 After briefly explaining why “the very word ‘ecumenism’ is both ambivalent and controversial,” the author notes that our current situation “challenges people living in safer circumstances to work harder on tearing barriers down.”5

It is significant and hopeful when a journal such as The Economist gives room to a speaker who is looking for a drastic reform of economics–a reform which will involve not only Christians, but all people of good will working together.

Recently, the Jesuit national review America cited The Southern Education Foundation January 2015 report:  “children growing up in poverty now make up the majority in the nation’s public schools.”6  While this may not be the case in Canada or Scandinavia or Japan now, does it not look like it will be the case in the future? Most economists are not optimistic about our current economic trends, either nationally or world-wide. Pope Francis’s expression “the globalization of indifference” is a warning.7

He has also found a better term than “fundamental option” to describe the obligation we have to correct our current economic injustices.  The Latin word “optio” is very poorly translated into English as “option.”  Francis’ much better term is that we have a “moral imperative” to help the increasing numbers of poor.8
For some of us, it was a surprise to hear that the reform of the Vatican offices is centered on ecumenism and dialogue.  When Francis addressed the Consistory of Cardinals on Feb. 14, 2015, he explained:  “Reform is not an end in itself, but a way of giving strong Christian witness; to promote more effective evangelization; to promote a fruitful ecumenical spirit; and to encourage a more constructive dialogue with all.”9 It would seem that Vatican structures will soon be open to a larger role for Christian Unity and Dialogue with Other Faiths.

In most sports, there is only one winner and all others are losers. In making this triple play, however, the pope has redefined what it means to be the winner.  He concluded his heartfelt homily at Tacloban with these words:  “So many of you have lost everything.  I don’t know what to say to you.  But the Lord does know what to say to you.  Some of you have lost part of your families.  All I can do is keep silence and walk with you all with my silent heart.” 10

Pope Francis is combining economics, ecology and ecumenism.  But even if there is no improvement in most of the world, he may already have won.  He has made us more aware of Christ walking with each of us.  And he has set the example for each of us, to walk with the most abandoned and desperate.

5.  Erasmus (a blog considering the intersections between religion and public policy), The Economist, Feb. 17, 2015, www.economist.com/blogs/erasmus/2015/pope-francis-and-copts.