Nigerian Missionary Oblate Fr. Nnaemeka offers insights about the Nigeria presidential elections which has been postponed to March 28, 2015.

One of the problems of our generation is the failure to understand what counts; the failure to focus on the essentials. For a long time now, Nigerians seem to have focused their attention on less important things, forgetting the essentials. Everybody has been tamed and forced to fight a war that does not exist. Politics have become the order of the day. In every platform people are obliged to politicize issues, whether they want them or not. In fact, we have all become actively partisan-  supporting candidates who may not even know that we exist.
Even the unemployed youths have all been lured into advertising, a mediatized non-existing massive job creation, which cannot benefit them in any way. They all speak of a President to be, whose credibility has no bounds, even if they do not know how he is going to carry out all his political promises. Even the so-called religious leaders have all been conditioned to see nothing except who becomes the next President of Nigeria. God has even revealed to some what He has plans to do to whoever votes for a particular candidate. All we see so far, is a Church choir singing Vote Buhari! or Vote Jonathan!, even when it is not clear if they really have a plan for a united and better Nigeria.
Our Nigerian Catholic Bishops make a timely appeal in the newly released Communiqué: GOOD FAMILIES MAKE GOOD NATIONS, released at the End of the First Plenary Meeting of the Catholic Bishops’ Conference of Nigeria (CBCN) at the Daughters of Divine Love Retreat and Conference Centre, Lugbe, Abuja (February 20 – 26, 2015)
“The time has come to realize that Nigeria is bigger than any individual, bigger than any of her ethnic, religious or political groupings. Our diversity is a beauty to celebrate in gratitude to God.  Every Nigerian has a right to be different in so far as such difference is not inimical to the common good and the ideals we share in common.  This is the time to reflect and to identify those ideals summed up in the words of our old national anthem: “Though tribe and tongue [and creed] may differ, in brotherhood we stand.” Faced with the challenge of nationhood, let us enlarge our traditional African concept of family.  Let us liberate ourselves from the shackles of ethnocentrism, of malicious ethnic and religious solidarity. Let us, in our diversity, recognize our common humanity.  For the sake of our children, and for the sake of generations yet unborn, let us see one another, irrespective of the families to which we belong, as members of the same family—the family of Nigeria”. See more at: http://www.cnsng.org/viewnews.php? 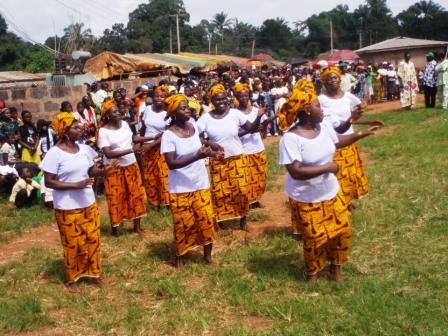 We have been pitted one against the other in a country that should have been united..  No one asks the prospective contestants which Nigeria they are campaigning to govern: A country divided between North and South? A country divided between Christians and Muslims? A country where political party members have no plan or intention, than to fight  each other?
Who speaks now of our dear Chibok girls who have spent ten months in captivity? Who talks about the deceased people of Baga? Who cares about the Nigerian refugees in Chad, Cameroun and Niger?
Our concern now is how to get our Permanent Voters Card – which is very good – but then, what about our fellow Nigerians who have been forced to leave their territories without burying their loved ones?  Nigerians have lost contact with reality. I am afraid we have already forgotten what really matters.
Tweet