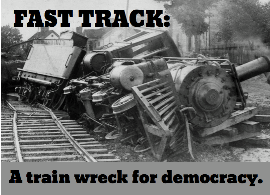 On February 17, the Missionary Oblates JPIC office joined in an interfaith letter signed by nearly three-dozen faith communities to oppose fast-track authority for the passage of an upcoming international trade agreement by Congress. The letter has been sent to all Members of the US Congress. Fast-Track authority paves the way for Congressional approval of trade agreements such as the looming Trans-Pacific Partnership (TPP) with little or no debate, and with no changes possible to the agreement that has been negotiated by the US Trade Representative, largely behind closed doors. This is an undemocratic process, which potentially denies a comprehensive analysis of the impacts of trade agreement provisions on vulnerable communities, workers and the environment, and which does not provide for detailed public hearings, despite the potential for significant public impacts.

Members of the Interfaith Working Group on Trade and Investments who signed the letter write, “Our faith traditions call for community participation in the democratic process because we believe this is the only way to ensure all people have a meaningful opportunity to participate in the creation of good policies. “Fast track” is a broken and undemocratic process because it privileges the views of powerful global corporations in defining the terms of trade agreements, while excluding voices of those adversely impacted. This impedes progress towards a more just world.”

CLICK HERE to see full text of letter with signatories