On January 12, 2010 a major earthquake devastated much of Haiti.  Among the thousands of buildings destroyed or damaged was St. Anthony of Padua Church in the mountain town of Fond ‘Oies.

The Oblates, who founded St. Anthony in 2007, feared the parish would dissolve after the earthquake.  But the parishioners had other plans.

Shortly after the rubble was cleared, the people of St. Anthony constructed a makeshift building to serve as their church.  It still stands today, a tapestry of tarpaulins and sheet metal.  Mass has been celebrated there every morning for more than five years.

During Mass the parishioners ask for one blessing every day – that a new church will rise from the ashes.  Their prayers have not been answered yet, but they have no doubt they will be answered someday.

“God acts in unusual ways in our lives and projects,” said Fr. Joe Corriveau, O.M.I the first pastor of St. Anthony.  “God’s plans are not our plans.”

Building a new St. Anthony Church is one of the final projects of the Oblates as they recover from the earthquake.  Most of the damage to Oblate property occurred in the capital city of Port-au-Prince. 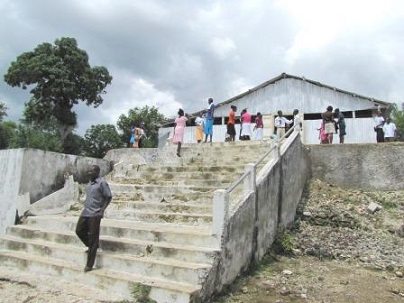 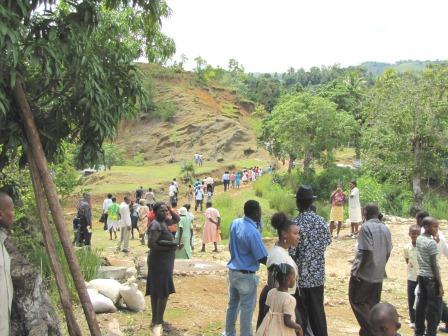 The Oblate Provincial House, including an annex that was under construction at the time of the earthquake, was severely damaged.  The scholasticate, along with housing for Oblate seminarians, collapsed.  Brother Weedy Alexis, O.M.I., a 28-year-old scholastic, died in the disaster.

For months after the earthquake the Oblates in Port-au-Prince lived in tents as they tried to be of service to their homeless neighbors.  Several Oblates moved temporarily to Oblate ministries in parts of the country where the damage was not as severe.  The Novitiate was moved to Les Cayes in the southern portion of the country.  It is still there today, although the Oblates are hopeful that someday a House of Theology can be built in Port-au-Prince.

Rebuilding the Oblate properties was slow and difficult.  It took about a year for the Provincial House to be rebuilt.  It was nearly another year before the buildings used by the seminarians were finished.

Father Joe, who oversaw much of the reconstruction, said the Oblates were more fortunate than most people in Haiti because they had money to rebuild, thanks to generous benefactors in the United States.

Today Fr. Joe continues to raise funds for the rebuilding of St. Anthony.  He visits U.S. parishes that are holding suppers, Bingos and other events for the cause.  He tells parishioners that things are getting better in Haiti, but that there is still a lot of work to be done.

“There are some improvements coming about in Haiti but still a lot of suffering,” said Fr. Joe.  “Working with and for the poor is a humbling situation.  It is very satisfying when you can help, but very humbling when you can’t.  I want to thank you once again for your missionary spirit which is inspiring and encouraging for us.  Without you we would not have been able to help the homeless, the jobless, the hungry and the sick.”