(Originally published in The Tablet by Peter Stanford. Reprinted with permission on OMIWORLD.ORG) 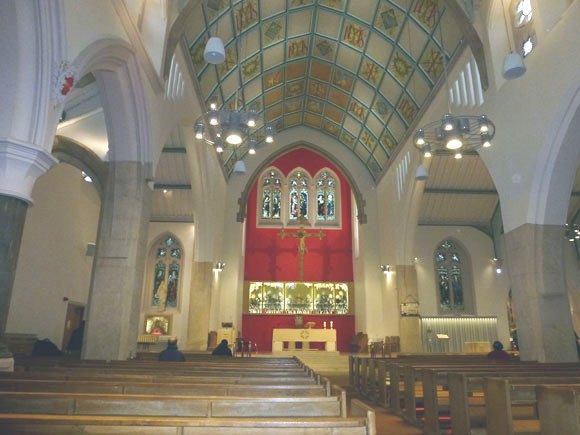 When they come to write the history of twentieth century English Catholicism, “Kilburn Cathedral” will merit a chapter all of its own. In its 1960s heyday, Sacred Heart, Quex Road (its proper name) in north-west London, run by Missionary Oblates of Mary Immaculate (OMI), boasted the largest congregation of any church in the country. There were 13 Masses on a Sunday for the 13,000 who queued to worship here, a feat only achieved by taking over an old Nonconformist (ed. Non-Anglican) hall next door and running extra Masses on the half-hour throughout the day. 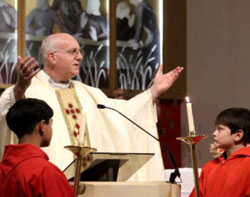 For hundreds of thousands of Irish émigrés, Sacred Heart, in what was then known as County Kilburn, provided a home away from home. So there were ceilidhs (ed. dances), hooleys (ed. parties), the St Patrick’s Day concerts at the art deco State Cinema on the High Road and racks of Irish papers. But this extraordinary parish, with its vast Pugin (ed. A famous architect) church, had a mission to integrate its parishioners into their new surroundings. There was a meet-and-greet service for those stepping off the “Boat Train” from Holyhead, hostels for new arrivals, an employment agency and the Marian Housing initiative that enabled young couples to get their foot on the property ladder.

On 21 February, the Sacred Heart began a year-long celebration of its 150th anniversary with a visit from the American Superior General of the OMIs, Fr. Louis LOUGEN. In July a special Mass will be said for all those who were married at Quex Road. When we arrived here 15 years ago, County Kilburn was slowly slipping off the map. The dance halls that once hosted Irish show bands had been demolished or put to other uses. The religious statue shop is now a pawnbroker. Quex Road continues to flourish, with the Sunday congregation still a robust 2,000 spread over five Masses. 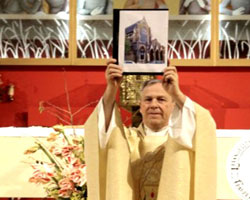 Fewer than 20 per cent of those who attend, however, are ethnically Irish, and they are an ageing group. The only times the diaspora gathers en masse these days is for funerals, or Masses of repatriation for those departing these shores to be buried under home turf. There is, inevitably, going to be a whiff of nostalgia about the 150th celebrations, albeit accompanied by a clear-eyed acceptance that things certainly were not all rosy back then.

There was poverty, prejudice against those first-generation Irish immigrants and damage inflicted on some by the Church itself. But the anniversary is also about celebrating the present. Those who fill the pews at Quex Road are from every corner of the globe – Eastern Europe, the Philippines, Somalia, Nigeria and many more. There are currently 58 nationalities in the parish and 38 languages spoken, including in the adjoining primary school where 81 per cent of the pupils are on free school meals. 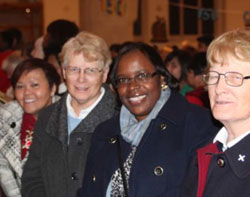 The church runs the local food bank. We have all heard lately the charge that our Catholic schools, our Catholic parishes, indeed every faith community, are somehow separatist, divisive, intolerant obstacles to multiculturalism, and therefore at the root of today’s problems with fundamentalism. Next time I am challenged with this nonsense, I am going to hold up the example of Quex Road.With its encouragement, the Irish community gradually merged into broader British society, to the benefit of all. And that is what continues to happen, buttressed by the church’s stated twin commitments to outreach and justice and peace. This is a church that nurtures what unites us because it lives out the values of a Church that teaches the tolerance and love of a neighbour. For 150 years, Sacred Heart has been giving the lie to talk of introspective religious ghettos by being a contributor to the common good of its wider community, and of the nation. Those who decry religion as sectarian would do well to pay it a visit.