While the secular media has reported the terrorist attempt to kill Christian congregations at two churches in Youhanabad, a suburb of Lahore, on 15 March 2015, we Oblates need to know that our brothers in Pakistan are living close to these dangerous situations. In fact, there is an Oblate house of formation (philosophy students) in Youhanabad, not far from the churches where these sad events happened. The Delegation Superior, Fr. Derrick WARNAKULASURIYA tells of this tragedy and asks for our solidarity in prayer.

Two churches in Youhanabad, Lahore, came under a suicide attack on Sunday, killing at least 17 people and injuring over 80, some of whom very critically. 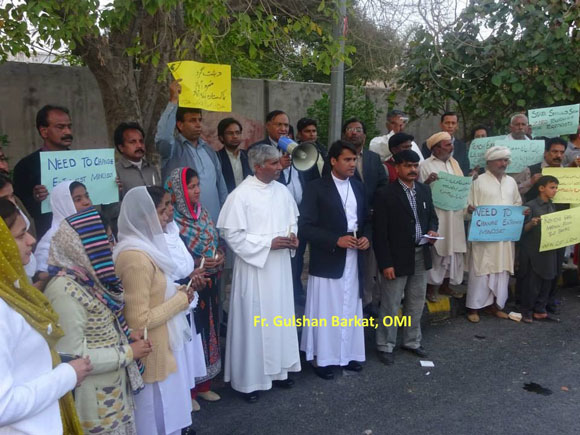 Youhanabad is the biggest Christian settlement in Pakistan where over 40 Christian denominations are living. The total Christian population there is about one hundred and fifty thousand, of which about 35% are Catholics. There are several churches and worship centers for each denomination. The Catholic Church and the Church of Pakistan are two major churches that house respectively 2000 and 1000 people at Sunday morning services. It was estimated that last Sunday, there were about 1700 people assembled for the Sunday Mass in the Catholic Church, while several hundred were also gathered to the Christ Church of the Church of Pakistan. Both churches were provided police security, but the few police personnel who were there at the Catholic Church were watching a cricket match that Pakistan was playing against Ireland in the world cup tournament when the attacker detonated his devices. If it had not been for the 18 year old Catholic boy (Akash) who wrestled with the human bomber and sacrificed his own life, several hundred men, women and children would have been massacred in a blood bath inside the church. Shortly thereafter, the second attacker managed to shoot three policemen who were providing security for Christ Church. He detonated the bomb he was wearing, killing himself and several worshipers.

Angry Christians turned violent and caught two suspected terrorists whom they lynched and then set their bodies on fire. Others destroyed both private and public properties. 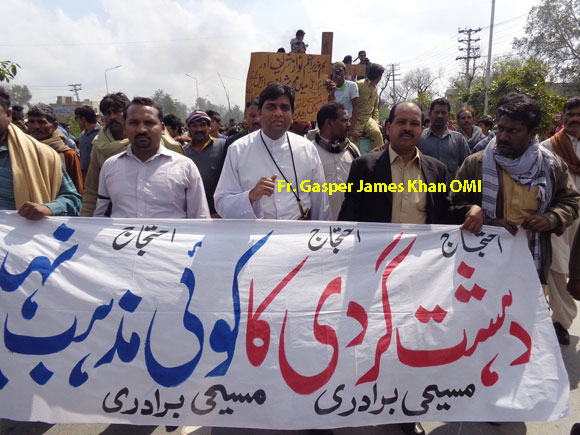 On 17 March, the bodies of the Christian victims were buried amidst much tension. All entries to Youhanabad were sealed and no movement was possible. I too had to stay in a nearby parish house from morning to evening. It was a sleepless night for all of us and no doubt for all the Christians living here for fear of Muslim mobs who had warned of setting fire to the whole area. We sent our philosophy students out of our house to a close by convent and now (18 March) we decided to send the boys home, for the situation is deteriorating. I also told the archbishop and the rector of the seminary that we are taking this action for the safety of the boys. The archbishop too agreed with our idea and perhaps the whole seminary will be closed till Easter.

Our situation is quite uncertain, and I have advised the other community members to be ready to leave the place at least for a few days, because there have reportedly been very unpleasant announcements over the public address systems of some of the mosques. Keep us in your prayers. God bless you all.