50 years ago, images of Alabama’s state-county and city police were seen by the entire world beating unarmed citizens who gathered non-violently in the city of Selma, Alabama on the Edmund Pettus Bridge. The veil of indifference was lifted up in a country which preferred the status quo rather than justice-equality and the pursuit of happiness for all.

I grew up in a white, interfaith, middle class suburb of New York City in the 1960s. I remember the nightly news and seeing images about the civil rights and the anti war movements playing out before us on city streets. I saw, but did not understand fully what segregation meant. I went to college at the University of Alabama in 1975 only ten years after Selma. People didn’t talk a lot about what happened, yet the walls of segregation/separation were still present. Everyone “knew their place” and I just followed.

It is with this background along with having been the Pastor of St. Francis Xavier in Overtown/Miami, Florida in the late 1990s, that I walked into the unfolding turmoil and injustice in Ferguson, Missouri in October. I walked in profound respect and awe of those who had to courage to stand up and speak out 50 years ago. 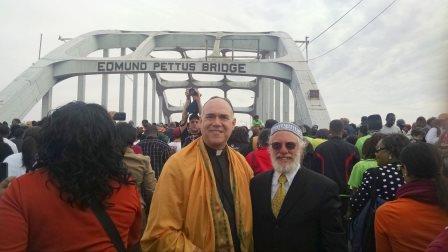 Last week I received a call from Rabbi Margaret Klein of Temple Knesset Israel in Elgin Illinois, who asked me to consider going to Selma with her husband Simon who was hoping to go. We have been very close friends for over 25 years. We would drive down on Saturday-9 hours, walk on Sunday and return Monday all the while staying with my Sister and Mother who live an hour away from Selma.

We left early on Sunday morning and took the county back roads so that we would not get caught in any traffic jams at the interstate exit. This gave us the opportunity to see the beauty of the country-side as well as the horror of the clear-cut forests laying bare the red clay soil to erosion. We arrived and could feel the energy in the air. We were warmly welcomed at the local Walgreens where we met an African-American Methodist Bishop in his magenta clerics and had the opportunity to share about where we came from and our reason for this journey. We parked our car on the outskirts of the city and walked to Temple Mishkan Israel. Simon and I were participating in the 50th Anniversary Prayer and Service sponsored by “the RAC” Religious Action Center of Reform Judaism and Temple Emanuel of Greensboro, NC. The Temple Mishkan Israel was dedicated in 1900 and in its day had a congregation of 120 families. At present the Temple is rarely used and has only 10 members.

Like the small Catholic community in the south, the Jewish community largely remained silent to the plight of the African-Americans and the social injustice of the Jim Crow laws which made voting nearly impossible. Yet as the movement progressed through the prophetic leadership of Martin Luther King Jr. things changed. Dr. King invited both Jewish and Catholic leaders to participate in the movement and this called the entire nation to take notice and wake up from its slumber. For the Jewish community they saw the movement as a new Exodus and for the Catholic community we moved out of our parochial stance to the inclusive teachings of Jesus and 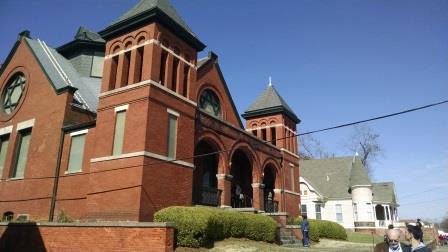 The Temple was full to capacity. We gathered in song and prayer and then were challenged by the preaching of Rev. William Barber, President of the NC NAACP and founder of the Moral Monday Movement. 50 years ago the Voting Rights Act was signed allowing all citizens to register to vote and vote with ease. Today those laws are being rewritten so as to limit those registering and the days and times to vote. We are in a state of regression and the chasm of segregation and income disparity is only growing. Pope Francis in the Exhortation Gospel of Joy, #54 also writes, “some people continue to defend trickle-down theories which assume that economic growth, encouraged by a free market, will inevitably succeed in bringing about greater justice and inclusiveness in the world. This opinion, which has never been confirmed by the facts, expresses a crude and naïve trust in the goodness of those wielding economic power and in the sacralized workings of the prevailing economic system. Meanwhile, the excluded are still waiting.” And while we see the slipping away of voting rights, we saw this week how the justice department of Alabama continues to claim “States Rights” as they block the judgments of the federal courts in regards to equal rights. Our work is not done!

Peter Yarrow of “Peter, Paul and Mary” shared with us the music that galvanized a nation and stories of joining Martin Luther King on marches, especially as they gathered in the City of St. Jude, Alabama, a city founded by Fr. Harold Purcell in the 1930s for the well being and advancement of the African-American Community. St. Jude was a center of activity in the civil rights movement.

The main speaker was Dr. Rabbi Susannah Heschel, daughter of Abraham Joshua Heschel noted philosopher and Rabbi of the 20th century. She challenged the Jewish community to re-establish itself as a prophetic community of faith, prepared to address issues of race, human rights, Middle East policies and gender inequality and injustice. As the gathering prepared to 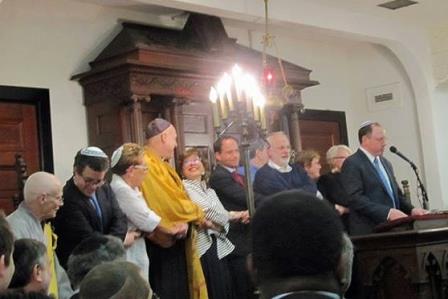 march toward the Bridge all the Rabbis and Clergy were invited forward. Myself and a Clergy woman came forward and were invited up on the bima/alter for the final song and commissioning. A powerful moment for sure and before leaving I was able to spend a few minutes talking to women who heard the call for volunteers out in California and took a bus and join in the march to Montgomery.

Then it was a slow walk to the bridge along with 80,000 others. Block upon block was full of people joining in song and spirit as we remembered the happenings of “Bloody Sunday” 50 years ago. As we walked there was also a festive spirit that we are not alone and that hope is alive. People were taking many photos and often stopped Simon and me for a photo with them; him, looking like a Jewish scholar and me wearing our cassock and cross, the orange Indian prayer shawl and a yarmulke. Yes, inclusive and welcoming to all!

As we approached the Edmund Pettus Bridge named after a Confederate General, U.S. Senator and Grand Knight of the Klu Klux Clan, I was overcome by the sacrifice of so many, most of whom were poor and people of colour who gave our nation a lesson in civics; that all people are created equal and are endowed with unalienable rights; Liberty, Justice and the pursuit of happiness. I then bowed down to touch the pavement were 50 years ago blood flowed.

And so as we drive back to the novitiate, I am grateful for the opportunity to join my friend Simon and the Jewish Community once again in an action of conscience and solidarity where the law of Love, compassion and respect shines out as a beacon of Hope for all the world to see.