NINIWA is a pastoral program for youth involved with the Missionary Oblates. It is active in twenty parishes in Poland. Twice a year, the youth of this movement participate in meetings, in different cities in Poland, in the Zycia Festival (Festival of Life = an evangelization celebration for youth), and in missionary volunteering. At this time there are 1500 participants in the groups. The community center is in Kokotek, near Lublin in southern Poland.

The authors of great musicals such as “Francis – the called one of Assisi” and “Exodus”, together with the Community of Niniwa, to celebrate its tenth anniversary, recently presented the musical “Jonah” – an adaptation of the biblical story of Jonah. In the second part of the celebration, there was a concert by Father Jakub Bartczak, a priest and rap musician. The gathering was held in the city of Katowice, with the participation of 6000 people.

A giant fish, a shrub which grows lettuce, a bicycle that symbolizes the will of God – these are just some examples of the show’s props. The play had 150 participants, including professional theater actors, guest vocalists and youth who prepared for several months in workshops.

The interpretation of the Book of Jonah by the author Mariusz Kozubek demonstrated in an interesting and amusing way the conversion of the inhabitants of a sinful city (Nineveh), as well as the struggle of Jonah with himself and with God. The story of the prophet is presented in nine scenes.

The work was composed of various styles and combinations of musical rhythms and sounds of Jewish origin, rock and pop music, with a very dynamic choreography and humorous scenes. The story was told through dances, songs and recitations presented in scenes such as: the storm at sea, the ship, the belly of the whale or the city full of luxury. 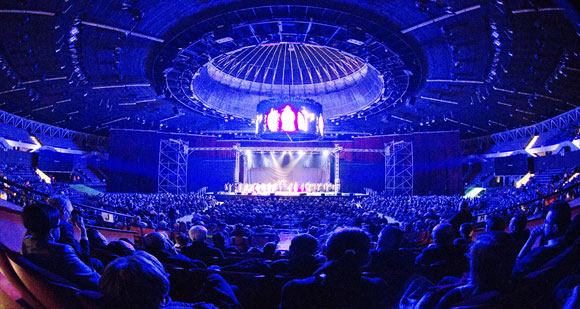 The event was a success. There were several curtain calls. The idea was to convey and stress the simple truth that God is merciful and wants us all to be saved, no matter what we think of the sinners of Nineveh, whether we want to condemn them or give them another chance.

The message of the musical led into the second part of the festival. The World Youth Day Cross was carried onto the stage where there was a prayer of adoration before moving on to the concert by the rapper priest. During the concert, various groups, associations and communities working with youth were introduced.

The organizers wanted to present the Church as a community open to all youth, whose diversity attracts and enriches. (P. Wojciech KLUJ)