More articles on Ecumenism at www.harrywinter.org 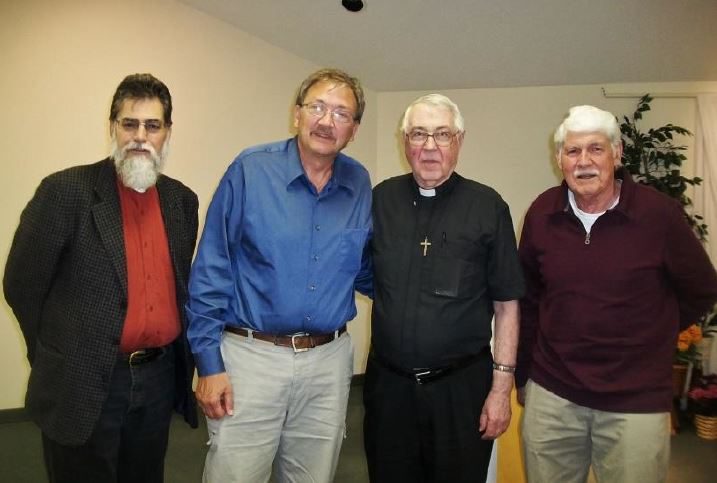 First Dr. Brenneman explained the beliefs of Islam, then their practices.  He concluded that while Christians and Muslems have much in common, there are major differences concerning their belief that Christian Scriptures have been corrupted, the Trinity means three gods, Jesus did not claim to be divine, and that He never died on the cross, but rather ascended to God and another was crucified in His place.

For me, the most interesting and challenging part of his presentation was this explanation that a Muslim can seriously consider the way of Christ if Christians will do the following:  First, a truth encounter in which Muslims read the Bible and have their questions answered about the differences above.  Second, a power encounter in which a dimension of the supernatural is experienced:  a vision or dream about Jesus, or a healing or answer to prayer.  Third, a love encounter, involving a relationship with a true Christian that leads the Muslim to begin investigating the claims of Christ.

Dr. Brenneman lived in Iraq for 4 years and Turkey for 14.  He speaks Turkish and  Kurdish.  His children were raised there and one lives in Turkey, a son married to a Turk from the one percent Christian minority there.  Recently, in Egypt, he spoke with  a Coptic priest of some of the  men who were beheaded by ISIS in Libya.  Some of their families  are now praying that the murderers would turn from being Saul to being Paul.

In Turkey, he witnessed Armenian Orthodox and Turkish Christians  washing each others’ feet to atone for the massacre of the Armenians one hundred years ago (recently commemorated by Pope Francis, with the Turkish Government protesting). He observed that such services were not widespread, but had at least started.

I provided handouts of two articles from the Jesuit national review America, the first by a woman student at Georgetown University, Jordan Denari, “Jesus Among Muslims–How interfaith exploration made me a better Catholic,”(Feb. 20, 2012, pp. 25-27). Dr. Brenneman and I both liked her approach, but disagree with her statement in comparing the two faiths that “Neither understanding of God is more right than the other” (p. 26).

A second handout was by Elias Mallon, S.A., “Who Speaks for Islam,” (America, March 16, 2015, pp. 19-22), explaining that Muslim scholars and organizations are speaking out against ISIS. Father Mallon observed “It has not been the case that no one was speaking out but that no one in the West–for various reasons–was listening “(p. 19).

Dr. Brenneman explained that many women in the Western World are attracted by Muslim men:  4 out of 5 converts to Islam in the US are women. He made us smile when he observed that Muslims revere the elderly (most of us taking part in his presentation were seniors).

But the captivating part was his accounts of Muslims being attracted by the message of Jesus:  love, forgiveness, mercy.  He had recently been approached by two Iranian Muslim men while he was visiting Iraq. They expressed a desire to become Christian.  He led them to confess Christ as Lord and Savior and to confess their sins to God and call on Christ.

During his 39 years of being an Assembly of God ordained minister, he has seen the way Jesus draws Muslims to accept Him.  He also warned against the kind of Dialogue which does not go on to Evangelization.  His experience is that many of the Muslims who engage in Dialogue are out to convert Christians.

Dr. Brenneman may be contacted through the website for North Central University:  www.northcentral.edu. The Five Ways Fellowship, endorsed and supported by the Missionary Oblates of Mary Immaculate,  is explained on the website “Mission-Unity-Dialogue,” (www.harrywinter.org), Five Ways page. Many thanks to the administrator of St. Patrick’s Church, Fr. Greg Gallagher, OMI, for permission to hold the presentations there, and to the staff of St. Pat’s for publicizing it.