News Update / Digest from the May 3-May 16, 2015 Edition of the Chicago Archdiocesan Newspaper, The Catholic New World 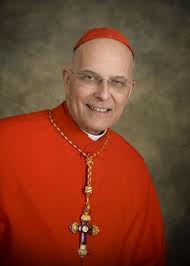 A “Month’s Mind” Mass, a centuries old tradition honoring the one-month anniversary of a person’s death, will be celebrated for Cardinal George on May 17, at 5:15 p.m., at Holy Name Cathedral, State and Superior Streets in Chicago. Msgr. Dan Mayall, rector of Holy Name Cathedral, will be the main celebrant and homilist.

During this Mass, which is open to the public, Cardinal George’s galero, the wide-brimmed, tasseled red hat, will be raised to the cathedral ceiling, joining the galeri of five previous cardinals: Mundelein, Stritch, Meyer, Cody and Bernardin.