Fr. Celso CORBIOLI reports on the many baptisms in the mission and on the situation in the country.

As many of you know, for a few years now, I am located in a parish in Bissau, the capital of this little country in Western Africa. The parish is called Antula and includes part of the city and a large area on the outskirts. The number of inhabitants continually increases because of the unending movement from the interior of the country toward the city. Consequently, the number of Christians increases each year. Last year, we had 360 baptisms, most of them adults. Again this year, the number will be more or less the same. For all this, we thank God, and at the same time, we pray for the gift of perseverance for all those who enter to become part of his family, so that they might be authentic witnesses of the Gospel.

A couple of years ago, we had written that we were planning 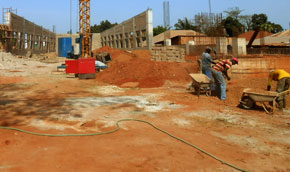 on building the church; it’s still not completed. Construction has begun and we hope that within a year or a little more, it will be finished.

After a long period of instability, Guinea Bissau is finally experiencing a bit of peace and progress. A few weeks ago, the President of the Republic welcomed to the presidential palace all the religious men and women of Guinea Bissau, gathered in those days for the visit of Cardinal João Bras de Aviz, Prefect of the Congregation for Institutes of Consecrated Life and Societies of Apostolic Life. The president, in his speech, repeatedly thanked the religious men and women for their presence and the help they give the country; he said that the palace is not his, but the people’s, and that we too can come and meet with him whenever we want. That was another sign of the desire to establish a climate of peace and collaboration.