By The Most Rev. Evans Chinyama Chinyemba, OMI, Bishop of the Diocese of Mongu, Zambia 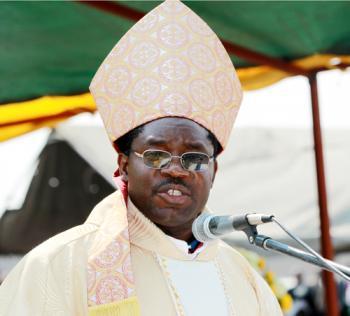 In this month’s Banabahesu, I would like to reflect with you on some issues that concern our values and what we stand for as a people. I am reminded of the spirit of our ancestors in faith- the various martyrs and what made them firm in their stand for faith.  Scanning the political landscape of the nation, one wonders what some of our politicians stand for?  When we imagine some of our ancestors in faith who stood by their values to the point of death and now when we see some of our political players who compromise their values and stand on shaky ground, then we question why! It is common knowledge that when values and principles in life are disregarded, then nothing else will be valuable in life.

Our ancestors in faith teach us

Scripture teaches us of some personalities who stood for values and principles. Once St. Peter with all his faults was convinced that Jesus Christ was the Lord, he never looked back. He went straight on even to be martyrdom. The same conviction was experienced by St. Thomas. Once he came to believe that Jesus Christ was risen, he doubted no longer. St. Paul too did the same. Once he came to learn that in Jesus Christ he will find more life, he worked tirelessly bringing Christianity to many places that needed to be converted before ending up a martyr himself. St. Mary of Magdala went through the same experience. Once convinced that Jesus Christ was the Lord, her faith never wavered. The story of principles and value is captured in chapter 7 of 2 Maccabees. The mother and her seven sons demonstrated to the world that when you know what you stand for and what your values are, nothing can distract you. Daniel 3:1ff tells a story of Shadrach, Meshach and Abednego. They were not ready to follow the crowd, instead, they wanted to follow the spirit of God hence their response, ‘There is no need for us to defend ourselves before you in this matter. If our God, whom we serve, can save us from the white-hot furnace and from your hands, O king, may he save us.’ Here we learn that no promise of delicious food could convince the seven brothers. No promise of promotion could move Shadrach, Meshach and Abednego. In a word, martyrs cling to Christ as their only hope. The foundation for doing what they do is their faith conviction, and the values which guide their lives.

Some aspects of our political life

What lesson do we learn from the early Christian community for our political life today? In Zambian politics, what matters especially in our parliament are numbers and not really promotion of values and principles. The politics of numbers that gives rise to arrogance is the game at play. Politics of numbers that does not protect values is the talk of the day every time we have elections.  Politics of numbers that looks not at principles of the nation is the mantra. Indeed, politics of numbers in the life of Zambia today protects the selfish interests of the ruling class at the expense of the common good of the citizens. We have seen situations where priority has been given to numbers instead of values. This has been at play in the introduction of certain statutory instruments that touch on the lives of many citizens. Very unpopular statutory instruments have been introduced in the country only to be met with outcry from the people. Politics of numbers make the ruling class deaf to the cry of its citizens. We continue seeing this in the constitution making ‘process’. History teaches us that ruling parties that have a majority in parliament deliberately do their own things at the expense of the good of the nation. The Chiluba administration did this when the country was given a good chance to come up with a constitution that could have helped the nation because the nation was still basking in the rays of recently acquired democracy. Yet selfishness took over and swallowed the whole process. The mentality of ‘let them talk because we have numbers in parliament’ does not help the nation. Or put in other terms, ‘we care less what the people say, we shall fix this in parliament because we have numbers’. The comfort in numbers in parliament makes the house lose meaning.  It is this mentality of self-preservation on the part of most of our politicians which makes most well-meaning Zambians doubt the power of parliament even over the constitution making process. Here we are, more than 50 years after independence, and we are still struggling with a constitution that inspires and is fit for a purpose. Our politics has become politics of green pastures and not values. Ours is a politics of what is in it for me, my business and my family, and my entire clan and not the nation. Gone are those days when we had career politicians who have values and principles to stand on. Today we are treated to politicians who are there to save their skins and rely on politics of numbers and not politics of values and principles. Politics of numbers is a mediocre politics and such politics cannot be entrusted with the affairs of the nation.

As we reflect on the spirit of self-sacrifice, imagine if our martyrs relied on numbers we were not going to be where we as a Church. Recently we celebrated the feast of the Ugandan martyrs. What a testimony in the face of royal brutality, St. Charles L’wanga and companions  believed in the power of God and they never allowed the Ugandan king force them to abandon their faith. Our martyrs relied on the values of belonging to Christ and believing in the gospel. It is this conviction that made them cling to Christ even when some of their friends ran away.

Let me end this Banabahesu by looking at yet one other aspect that has continued to rock our political landscape during elections. We are told that because of the high poverty levels, politicians go round wards or constituencies giving incentives to the electorates so as to ‘persuade’ them to vote for their party. At times it is said that even village headmen, headwomen, or other prominent persons in any locality demand things which include money from visiting politicians if they want to have positive votes from their people. Is this way of doing politics based on the values or the quality of the candidates aspiring to be our political leaders? This degrading trend should stop. Politicians should desist from buying the electorates. On the other hand no one should ask money, mealie meal, sugar, etc from aspiring candidates. This behavior is an insult to the nation and to the principles of democracy. If this behavior is allowed, we shall continue having politicians who have no real values leading us simply because they have the political buying power within reach. Should the poverty situation of our people be exploited and to perpetuate politics that dehumanizes the masses!

Banabahesu, the early Christians by their stance teach us of the importance of conviction that is based on values and principles. Let us take this opportunity given us each year to reflect on the lives of the  many saints who sacrificed their lives because they refused to compromise their faith and stood firmly by their  values and principles.