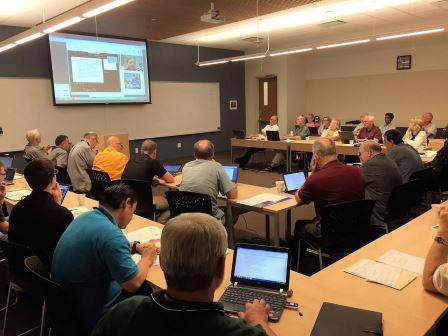 During the week of June 30 to July 4, Missionary Oblates from five continents gathered together in a “Cyber Meeting Room” for an international congress titled, Oblate Charism in Context. Sponsored by the General Administration in Rome, this remarkable online event simultaneously connected eight locations around the world for three hours of live streaming video each day.

The online “gathering” was historic. From anywhere in the world, all that was required to attend and participate was a computer with an internet connection. . The event coordinator, Fr, Fabio Cardi, OMI, said, “…we felt really one family, the distances are no longer a barrier.”

In preparation for the event, more than 100 reports were prepared by participants from a variety of ministries and cultures which included lay associates and employees as well as Oblates. During the daily three-hour international connection, live reports were streamed from regional centers in: Manila, Philippines; Mexico City, Mexico; Colombo, Sri Lanka; Kinshasa, D.R. Congo; Johannesburg, South Africa; Rome, Italy; Obra, Poland; and San Antonio, Texas in the U.S. The international connection was then followed up by webcasts originating from the eight regional centers to their individual constituencies.”

According to Fr. Ciardi, the primary objective of the congress was, “…to listen to the opportunities and the challenges to the Oblate charism from its being lived in different contexts, with a view to give a new impetus for the entire Congregation, 200 years after its birth.”

The reports from the Congress will be gathered and distributed along with other materials by the General Administration to each Region providing a resource for a continuation of the dialogue and to encourage the study of Oblate history, spirituality and missiology, especially among younger Oblates.

Summing up the experience, many thought this online gathering should be only the first of its kind. Fr. Jim Brobst feels live-streaming holds potential for future meetings large and small, “To look at the technology available today and realize what it can do for us as a worldwide congregation, we would be absolutely blind to the signs of the times if we did not do this type of thing far more frequently.” The organizer for the U.S., Fr. Frank Santucci thought how the Founder might react, “We can hear the words of St. Eugene when he embarked on the adventure of foreign missions echoing again as he looks at our use of media: Here is a vast field that is opening up to our zeal.